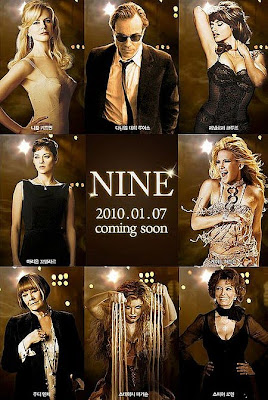 The first poster for "Nine" musical finally arrives, only a month before its premiere. Directed by Rob Marshall "Nine" is a vibrant and provocative film that follows the life of world famous film director Guido Contini (Daniel Day-Lewis) as he reaches a creative and personal crisis of epic proportion, while balancing the numerous women in his life including his wife (Marion Cotillard), his mistress (Penelope Cruz), his film star muse (Nicole Kidman), his confidant and costume designer (Judi Dench), a young American fashion journalist (Kate Hudson), the whore from his youth (Stacy Fergie Ferguson) and his mother (Sophia Loren).
Posted by DEZMOND at 8:53 PM

They looks shiny and sexy... I love Cruz's expression!

So, Daniel Day-Lewis is acting in something (anything) this year?
I guess now we know who'll get Oscar this year. :)) (Male lead Oscar)

I'm looking forward to this. :)

Yep, Daniel is like Sean Pean or Hilary Swank: none of them is overtalented, and they always have the same boring approach to every role, but they always get awarded for everything they do.