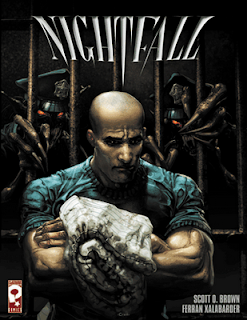 According to "Variety" "Aurora Productions" has teamed up with Platinum Studios to develop a feature film of Platinum's graphic novel "Nightfall". Penned by Scott O. Brown and illustrated by Ferran Xalabarder, this 2007 novel centres on a man who is sent to prison only to discover it is controlled by vampires. The producers want to make a visually very exciting movie, which won't be difficult since according to first gossips the director of the movie will be Uros Stojanovic, young Serbian director the author of visually sensational 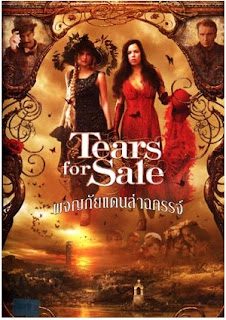 epic tale "Tears for Sale" (aka "Charleston and Vendetta") which was the biggest Serbian blockbuster in 2008 set after WWI when Serbian women were left without any men after the war in which almost one  million Serbs were killed (Serbia has 8 million people in total).  The film followed two sisters in a village left without men, who went on an adventure to find themselves some manly love. You can check out the trailer for Uros' blockbuster right here:

The producers want to make a visually very exciting movie, which won't be difficult since according to first gossips the director of the movie will be Uros Stojanovic...

I wouldn't agree with this. It will be extremely challenging to make visually exciting movie with that premise. I mean, it is a bloody prison (lifeless and dull surrounding), and that probably at night or in dark (because of vampires present). How could that setting be anything but visually boring?

I'm becoming increasingly upset that Uros's last film "Charleston and Vendetta" still hasn't seen its DVD release. I didn't see it in theatres, and it was released in January of 2008 (a long time ago). I've managed to get my hands on some divx that seems to be a rip of some DVDscreener. And some scenes are missing in that release. So I decided against watching it (so far).
"Distributors" if they could be called such, are constantly delaying DVD release, so that I'm beginning to wonder if it will ever see the light of day. In the end, my chance of seeing this movie rests in its TV release.

visually exciting doesn't have to mean - colourful, bright and picturesque. It can also mean scary exciting, the vampires could be visually stunning, the scary scenes visually very vivid etc. Uros might bring something new, like del Toro did with PAN'S LABYRINTH ...

Are you sure that TEARS FOR SALE still hasn't hit the DVD market? I thought I saw an advertisement for it on TV?

And if it still isn't out it might have something to do with the possible TV series or just the TV broadcast of the film. You know how they do that business in Serbia :)

Visually exciting really doesn't have to mean - colourful, bright and picturesque. But let's be fair, any kind of prison setting would have to be dull. :) Vampires and darkness could be interesting visually, but not gray and monotonous halls of prison.

I'm sure there will be a lot of red colour to bright up all the greyness and blackness of the prison :)))

But, Bels, I must admit, I'm a bit disappointed that none of our American friends has commented the trailer above :(

Maybe no one has seen it?

Obviously, but that's exactly why I'd put it here, to introduce people with that movie. But, then again, I'm sure at least some people saw it, since the balance between people who just read this blog and those who also leave comments is 1000:1 :)))