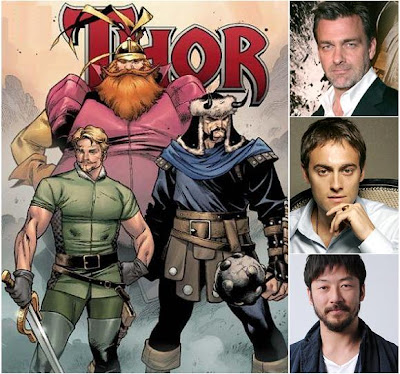 Today's hottest gossip is again connected with the new casting in Kenneth Branagh's adaptation of "Thor". "Variety" has published (and quickly removed) an article about Stuart Townsend, Ray Stevenson and Tadanobu Asano being hired to play a trio of Asgardian adventurers who fight alongside Thor, called The Warriors Three.
If the story is proved true, they will join the cast that already includes Chris Hemsworth, Tom Hiddleston, Natalie Portman, Anthony Hopkins, Jaimie Alexander, Colm Feore, Samuel L. Jackson and Stellan Skarsgard. This interesting fellowship will start shooting in two months, with the premiere of the movie set for 2011.
Posted by DEZMOND at 9:24 PM

I'm a little confused. One of "Warriors Three" is seriously overweight. Yet none of these actors looks like that. How are they planning to "resolve" this?

Well, Ray Stevenson is quite a hunky guy, so he'll fit nice into the part, he was after all THE PUNISHER and the famous hulk from ROME :))

And I must add that Stuart will fit perfectly into that green costume, if he really gets the role.

I still think Ray Stevenson is too fit (or too slim if you prefer) to play that part without some extensive "modifications". :)

well, it's the charisma that counts, not the muscles :P