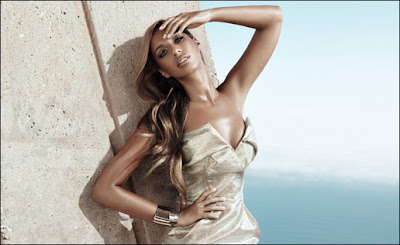 Since James Cameron's last movie "Titanic" had a theme tune that topped charts across the world and became one of the bestselling and most beloved songs in history, he decided to do the same with his upcoming sf saga "Avatar". One of today's best vocals, young superstar Leona Lewis will sing "I See You" the main theme from "Avatar". The song will be released as a single on 15th December, just ahead of the long awaited space opera and will also play over the closing credits of "Avatar".
The new song is written and produced by composer James Horner and producer Simon Franglen, both of whom worked on Celine Dion's "My Heart Will Go On" from 1997's "Titanic". And since Leona truly is considered to be an heiress to Celine's pop queen throne, having both her sensuality, talent and breathtaking voice, this seems as the most perfect choice.
Being Leona's huge fan, now I just can't wait to hear the song before seeing the movie itself :) She has just released her second album "Echo" and a brand new single "Happy" which was composed by amazing Ryan Tedder who made her breakthrough hit "Bleeding Love" as well as Beyonce's "Halo" and his own band One Republic's hit "Apologize".
Jake Nava, famous music video director who created some of the most beautiful music videos such are Shakira's "Shewolf", Beyonce's "If I Were a Boy", Robbie Williams' "Lovelight" , is currently shooting the video for Leona's Avatar song.
Posted by DEZMOND at 12:14 AM