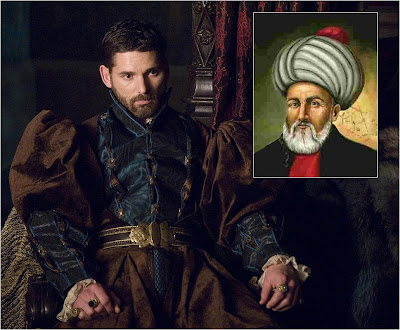 It seems that Turkish government is ready to support the movie project which will describe the life of famous 16th century Ottoman admiral and cartographer Piri Reis. This epic movie is expected for theatrical release in 2011. The movie, working tittle "Barbaresque", will recount how Piri Reis, best known for world maps collected in his "Kitab-i Bahriye" ("Book of Navigation"), along with his uncle, Kemal Reis, took part in an Ottoman navy mission to Spain to rescue the Arabs and Sephardic Jews who were expelled by the Spanish Inquisition in 1492. A life-size replica of Piri Reis’s vessel is currently being built in the Tuzla shipyards for the purpose of the shooting.
And why is this project so interesting to HOLLYWOOD SPY (beside the fact that we are obsessed with historical epics)? Well, Eric Bana has apparently been in talks to take the role of the legendary seaman. The producers are, reportedly, also in talks to sign French actor Jean Reno for the role of Kemal Reis and they would like to sign in Keira Knightley as well (which we hope won't happen, there's just too much of her these days). Shooting will take place in Malta, Italy and Spain.
Posted by DEZMOND at 8:39 PM

I don't think there is much of Keira Knightly these days. At least not as much as before. I can only remember her in Atonement and Duchess last year.
Erik Bana however, is working more and more.

Her name appears in all the interesting historical projects these days.

But, Hollywood should, by all means, give us more of our Bananaman :) Together with Karl Urban he's the most undeservingly neglected actor out there.