RACHEL MCADAMS AS THE BLACK CAT IN SPIDERMAN? 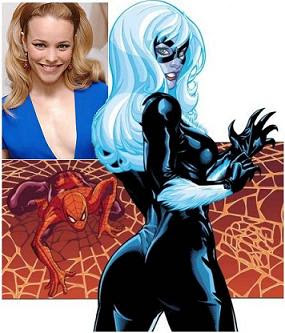 Today's hottest rumor says that Rachel Mc Adams might be getting a role in "Spider man 4". Apparently she has talked with the movie's producers about playing Felicia Hardy a.k.a. The Black Cat. Nothing is official, so McAdams is only the top contender to play the feline villain, who starts out as a small cat burglar in the comic books and develops an obsession with Spider-Man. The movie will probably have two villains.
On the other side of the ocean, another young actress has put her paw on a role in this film. In one of her interviews Romola Garai has revealed that she too is auditioning for a role in "Spiderman 4", but it could me one of the smaller ones. The movie is supposed to be released in May 2011.
Posted by DEZMOND at 9:19 PM