CATE BLANCHETT WINS OUR "BEST WHEN NOT LOOKING THEIR BEST" POLL 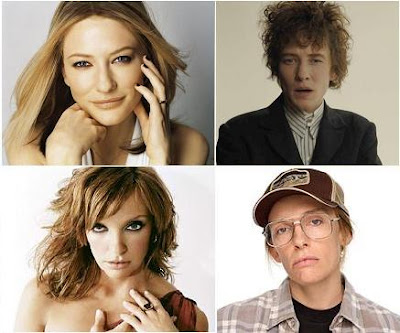 In a very close finish, Cate Blanchett has won our BEST WHEN NOT LOOKING THEIR BEST poll over equally amazing Toni Collette.
Being the most talented and most expressive actress among the living stars of Hollywood, Cate Blanchett didn't really surprise anyone when she has decided to portray a man in a movie, and not just any man but a rock legend. In 2007 she decided to play one of the incarnations of Bob Dylan in "I'm not There". Although the make-up department did an amazing job transforming her into a man, it was Cate's true talent that created magic on screen, bringing one of the most amazing performances ever to be seen in Hollywood. Even though the movie itself was self-centred, boring and auspiciously confusing, her performance managed to rise above the whole project and stun the critics and the viewers. She was nominated for an Oscar and Bafta that year and managed to win a Golden Globe for the role. She also won tens of other important awards for her portrayal of Bob Dylan.

Toni Collette took the second place with just one vote less. Nobody had any doubts that she will create miracles and wonders after it was announced last year that she will play four roles in "The United States of Tara". Playing a women with multiple personality disorder, she had a special task of playing a man as well. One of her alter-egos is a primitive, macho hillbilly called Buck, who basically represents the inner strength of her main character, Tara. Although not everyone liked the show (I did) everybody agrees that Toni's performance is a historical one, never before seen on television. No wonder she won a Golden Globe for it.

Don't forget to vote in our new poll. It will last till next week and the topic is - MOST PROMISING UPCOMING ACTION STAR. This year has brought us a number of really cool, fresh looking and talented young actors scoring huge roles in the current or future blockbusters. Check them out above in the poll: Chris Pine STAR TREK, Chris Hemsworth THOR, Michael Fassbender CENTURION, Sam Worthington TERMINATOR, AVATAR, CLASH OF THE TITANS, Tom Hardy MAD MAX and Taylor Kitsch JOHN CARTER OF MARS. You can vote multiple times.
Posted by DEZMOND at 11:12 PM