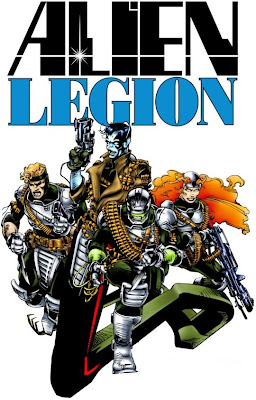 It seems that "Disney" and Jerry Bruckheimer are planning an adaptation of an epic comic book from the 1980s called "Alien Legion" that was basically the French Foreign Legion in outer space. Writers Derek Haas and Michael Brandt, ("3:10 to Yuma", "Wanted", "The A-Team"), are writing the screenplay.
"Alien Legion" was about the members of a military unit called Force Nomad, composed of the "dregs of the universe" with recruits coming from all kinds of different planets. The cast includes leader Sarigar, whose lower half is serpentine, fully humanoid Torie Montroc, and probably the most popular character, Jugger Grimrod, a Thraxian. The idea of "Alien Legion" universe was to describe a giant extrapolation of the American democratic melting-pot society where different races and cultures work together for the common good while dealing with the pluses and problems that the nation's diversity creates.
The comic was the longest continuously running series in the history of 1980s "Marvel" imprint "Epic Comics".
Posted by DEZMOND at 6:49 PM

We should expect these kind of movies in a future. Disney's acquisition of Marvel entails possibility for even more of comic book movies.

Yep, they describe this as possible mix of STAR TREK, HEROES and STAR WARS :)