FIRST PIC FROM ROMAN EPIC "THE EAGLE OF THE NINTH" 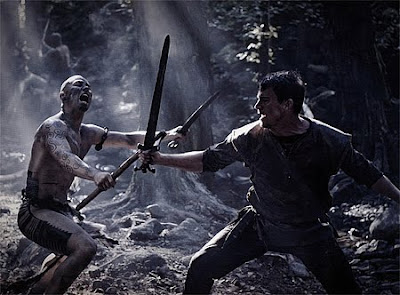 Here's the first exclusive picture of Channing Tatum in a fight scene from the upcoming Roman epic "The Eagle of the Ninth". The $23 million epic is just days away from wrapping up its shooting in Scotland.
As you already know the story revolves around a wounded Roman soldier (Channing Tatum) and his loyal Celtic slave (Jamie Bell) who try to solve the mystery of the Ninth Legion, a brigade of Roman soldiers that vanished after heading into the untamed Highlands of Scotland 15 years earlier.
Stay tuned for some new pics, we'll probably have more quite soon :)
Posted by DEZMOND at 9:04 PM