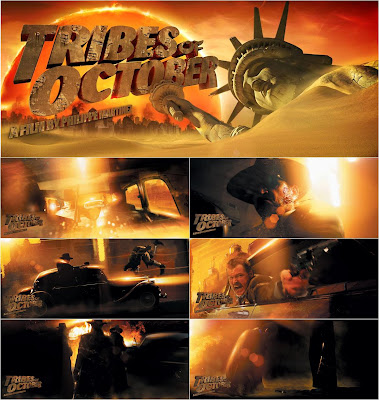 Here's some cool concept art from the future post-apocalyptic thriller "Tribes of October" by Philippe Martinez. The principal photography has started in August and the stellar cast has already been gathered. Apparently Ray Stevenson, Jaime King, Stephen Moyer, Robert Duvall, and James Caan have all signed up for this new film.
Here's the plot: In a battle of biblical proportions under an eternally crimson sky in post-apocalyptic New York city, detective Michael Hillburn must cross the city on the most dangerous night of the year to avenge the death of a fellow officer and save May Kelly, the girl he loves, from the clutches of the elusive crime boss, Lord Akuma.
Click on the image to take a closer look.
Posted by DEZMOND at 9:53 PM