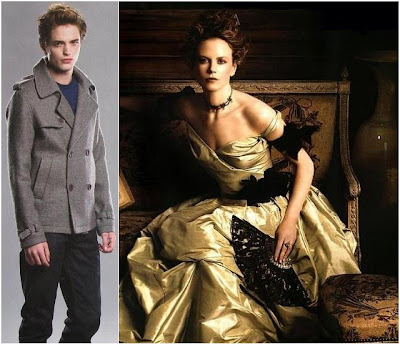 Oh, what a strange casting choice. According to "Screen Daily" snow beauty Nicole Kidman and every young girl's romantic obsession ,Robert Pattinson, will join their forces in an upcoming British film "Bel Ami".
It is an adaptation of the Guy De Maupassant famous novel, and it will be directed by acclaimed British theater directors Declan Donnellan and Nick Ormerod. The film centers around a man in 1890's Paris who ascends to the top of high society by sleeping with the most prominent and powerful women in the city. The film will be shot next spring in London and Budapest.
Now, when I come to think about it, there is a similarity between Kidman and Pattinson. They are both very inexpressive, reserved and cold in their acting, but that's exactly what makes them perfect for the roles of snobbish and uptight members of the high class. I hope for the good costumes as well.
Posted by DEZMOND at 10:27 PM