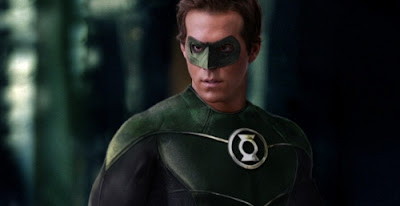 It seems that hunky Ryan Reynolds really had a good year in 2009. Not only that he married his beloved Scarlett Johansson, and starred in two big cinema hits "Wolverine" and "The Proposal", but he also got two superhero tittle roles in the future blockbusters "Green Lantern" and "Deadpool".
Here's what he said recently about playing the green masked hero: "I've known about Green Lantern my whole life, but I've never really followed it before. I fell in love with the character when I met with director Martin Campbell. When I sat down with him, I really got what it is that this guy is all about. When you have a guy like Martin Campbell, part of his charm is that he has ba--s of titanium, and the other part is that he's slightly crazy, and you have to be to take on something with the scope of Green Lantern. He's less of the director and more of a general. He just really knows strategies, he knows the intricacies, and his attention to detail! It's infectious. I sat down with him, and I could not even believe what he was saying. When I went to the meeting, I was entirely cynical. I thought, "What the hell, I'll see what they have to say," and I left the room with a completely different perspective."
Naturally, you are perfectly aware that HOLLYWOOD SPY has published this story only because it matches its trade mark green colours :)))
Posted by DEZMOND at 9:25 PM