FIRST PICS FROM THE SET OF "THE TUDORS'" FINAL SEASON 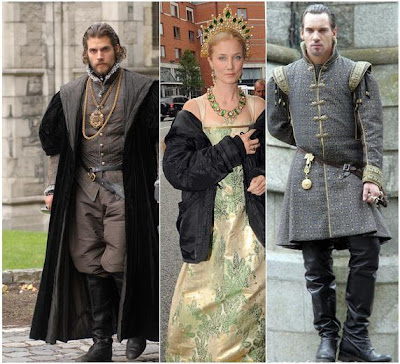 Here are the first pics from the set of the hit show "The Tudors". The fourth and the final season is currently being shot in Europe with the shooting scheduled to last for six months. The pictures show Henry Cavill, Joely Richardson and Jonathan Rhys Meyers. As you can see Cavill and Meyers are portraying king Henry and his best friend sir Charles Brandon in their mature age, while beautiful Joely has joined the cast as king's last wife.
The final season of "The Tudors" will premiere next spring (thanks to SHOWTIME for premiering the show one day before my birthday :))))). Although the fans of the popular show are sad that it will end soon, there's something that can bring them some comfort: the show's creator, ultra talented writer, Michael Hirst is already preparing "Camelot", a new historical television treat, for Showtime.
Posted by DEZMOND at 9:15 PM