KULL WILL CONQUER YOU AGAIN (OR AT LEAST HE'LL TRY) 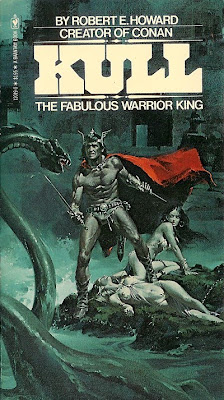 Since the original movie from 1997 obviously wasn't bad enough, it appears that "Paradox Entertainment" is presently working on a reboot of the "Kull the Conqueror". The 90's movie was helmed by John Nicolella with Kevin Sorbo in the title role. Kull is the product of Robert Ervin Howard who later used Kull as a template for creating the character of his another successful sword and sorcery hero - Conan.

A native of Atlantis, Kull came of age with his family in Tiger Valley until a flood wiped out his clan out. He is brought up by another clan, but he stands up for a woman destined to burn alive and ends up banned from Atlantis. He sails from the continent and becomes a mercenary. Later on he'll become king, just as Conan will do thousands of years later. Under his influence, his land Valusia ends up as the most powerful kingdom of the time.
So what's up with this? We'll suddenly have Conan, Kull and Red Sonia all on the big screen again in the upcoming decade?
Posted by DEZMOND at 9:09 PM