"CENTURION" HAS FOUND ITS U.S. DISTRIBUTOR

Don't worry Americans, you will be able to see the upcoming epic "Centurion" as well since "Magnet Releasing" has announced today that it has acquired U.S. rights to this sword and sandal movie starring Michael Fassbender, Dominic West and Olga Kurylenko. "Magnet Releasing" will launch "Centurion" this summer as the 6th entry in their "Six Shooter Film Series", a collection of six of the most exciting contemporary worldwide action films that includes "Bronson", "Red Cliff", "Ong Bak 2", "District 13: Ultimatum" and "Warlords". 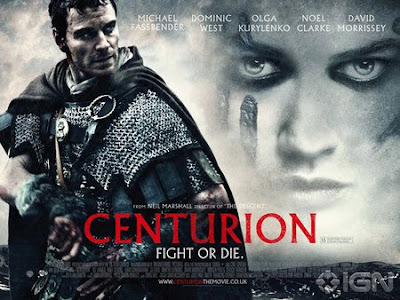 Boasting savagely violent battle scenes and an adrenaline fueled chase through the breathtaking Scottish highlands, "Centurion" is set during the war between Roman soldiers and Pict tribesmen during the 2nd century Roman conquest of Britain. Fassbender stars as Quintus Dias, Roman centurion and son of a legendary gladiator who leads a group of soldiers on a raid of a Pict camp to rescue a captured general (West). The son of the Pict leader is murdered during the raid, and the Romans find themselves hunted by a seemingly unstoppable group of the Pict's most vicious and skilled warriors, led by a beautiful and deadly tracker (Kurylenko), who are hell bent on revenge.
Posted by DEZMOND at 10:20 PM