BRADLEY COOPER AGAINST WOLVES IN "THE GREY"

It seems that those newly built abs, that Bradley Cooper has sported at the sets of the upcoming "The A-Team" might get eaten by wolves! Deciding that he should become an action star like his buddy Ryan Reynolds, Bradley will team up with director Joe Carnahan again in a new thriller "The Grey" as one of the survivors of a plane crash who are hunted by a pack of wolves in the wilderness. Or as Carnahan describes it himself: 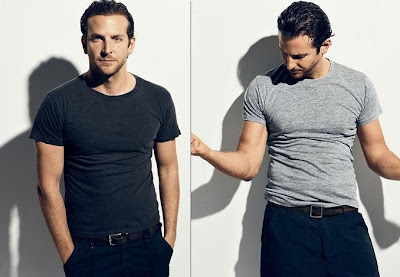 "The Grey" is about a group of pipeline workers in Alaska flying back into civilization after being remote for a number of months. The 737 they're on goes down, and they begin to be hunted by a pack of rogue wolves. It's very much a man vs. nature adventure, existentialist kind of drama that I want to do.
Sounds extremely scary to me, but if you like action packed horror movies ...
Posted by DEZMOND at 9:39 PM