LISA SEE'S "PEONY IN LOVE" TO BE ADAPTED INTO A MOVIE

According to "Movieweb" Erin Cressida Wilson will adapt Lisa See's novel "Peony in Love", which deals with the difficulties and oppression facing women in 17th century China. 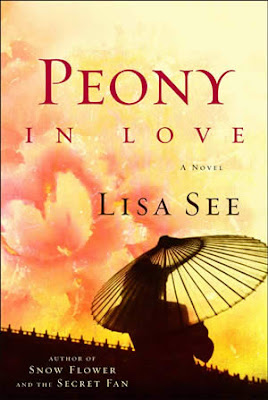 The story revolves around a young woman who starves herself to death after falling in love with a man she fears she'll never be allowed to wed. She comes up with her plan after seeing the Chinese opera "The Peony Pavilion" which tells a similar tale. A large part of See's book takes place after the young heroine has died, as she encounters a series of ghosts, including her dead grandmother, who impart their own experiences.
As you already know, the popular Chinese-American author Lisa See already has another of her bestselling novels scheduled for adaptation for 2011. Director Wayne Wang is making a movie out of her book "Snow Flower and the Secret Fan" with Hugh Jackman in the lead role.
Posted by DEZMOND at 9:16 PM