PENELOPE CRUZ TO JOIN JOHHNY DEPP IN "PIRATES OF THE CARIBBEAN ON STRANGER TIDES"? 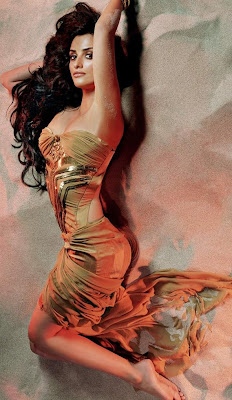 (unlike her best friend Salma Hayek), and I'm not a fan of "Pirates of the Caribbean" franchise, I thought this piece of news might sound cool to some of you :) Judging from the latest reports she is in negotiations to join Johnny Depp in "Pirates of the Caribbean: On Stranger Tides". If she signs the deal she would play the "foil" to Johnny Depp's Captain Jack Sparrow and would also get reunited with director Rob Marshall, who is helming the new film.
Although the details of the plot haven't been released yet, according to "Movieweb" it is believed that the film will focus on the Fountain of Youth. The movie is supposed to start filming in Hawaii this summer, with a May 20, 2011 premiere.
Posted by DEZMOND at 4:58 PM