The four most beautiful and most talented Hollywood actresses have found themselves rather unusual new roles this week.
Rachel Weisz has joined thriller "Dream House" starring opposite Daniel Craig. The story follows a successful publisher (Craig) who quits his Gotham job and relocates his wife (Weisz) and two daughters to a quaint New England town, only to discover that their perfect new home was the murder scene of a mother and her two children. 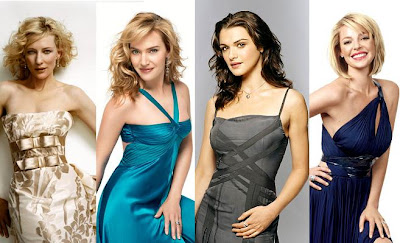 Stunning Cate Blanchett has joined "Hanna", drama directed by Joe Wright with young Saoirse Ronan and Eric Bana, which centers on a 14-year-old Eastern European girl who has been raised by her father to be a cold-blooded killing machine.

Deeply profound Kate Winslet has joined a new film from Steven Soderbergh together with Jude Law, Marion Cotillard and Matt Damon. Named "Contagion" the movie centers on a deadly worldwide disease with several different storylines branching off of that major point.

Adorable Katherine Heigl will star in "One for the Money", which is based on the Janet Evanovich novel which spent 75 consecutive weeks on "USA Today's" bestseller list. The story follows Stephanie Plum, an unemployed lingerie buyer who becomes a bounty hunter to make ends meet.
Posted by DEZMOND at 9:34 PM