THE SPECTACULAR POSTER FOR THE FINAL, FOURTH SEASON OF SHOWTIME'S "THE TUDORS"

The closing time for one of the most beloved and most respected historical shows ever, Showtime's "The Tudors" saga is getting nearer and nearer. After many awards and high ratings and a world wide success, the final season begins Sunday, April 11th and it will focus on Henry's tumultuous relationships with his last two wives, Katherine Howard and Catherine Parr, and his final descent into madness. As usual this season will also have 10 episodes written by series creator the amazing Michael Hirst. 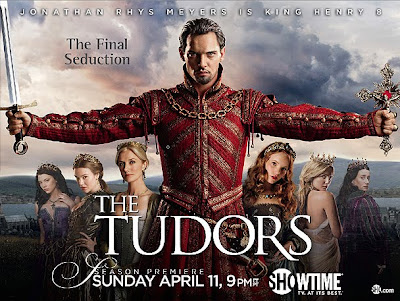 As you can see in the spectacular poster for the end season, Jonathan Rhys Meyers is surrounded by his harem of beautiful wives, ex wives, and ghost of wives and hence the appropriate tittle for the show finale - "The Final Seduction". One of the most anticipated parts of the last chapter will be the appearance of lovely Joely Richardson who is playing the 6th and final queen Katherine Parr.
Although most fans can't believe that Henry's adventures are wrapping up, it seems that even the most capable of kings sooner or later run out of wives so we shall have to say farewell to our favourite saga this spring.
Posted by DEZMOND at 9:41 PM