Director Joe Johnston, who is currently promoting his horror flick "The Wolfman" has recently given the first info on the latest pre-production status of the upcoming adaptation of "Captain America": 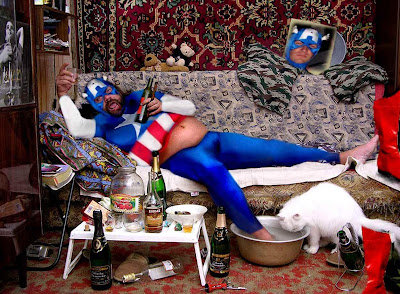 We're in prep. Rick Heinrichs is production-designing and we're set up down in Manhattan Beach, California. It's the part of the process that I love the most. We have eight or ten really talented artists, and we all just sit around all day and draw pictures and say, 'Hey, wouldn't it be cool if we could do this?' It's that phase of the production where money doesn't matter: 'Let's put all the greatest stuff up on the wall and then later see what we can afford.'The film will begin in 1942, 1943 during World War II. The stuff in the '60s and '70s from the comic books we're sort of avoiding. We're going back to the '40s, and then forward to what they're doing with Captain America now.
"Captain America" is supposed to premiere in summer 2011.
Posted by DEZMOND at 9:14 PM