"BRAND NEW TEASER FOR "PRINCE OF PERSIA: THE SANDS OF TIME" 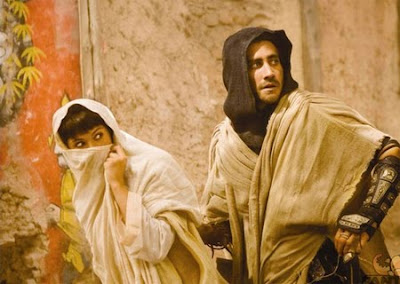 Super Bowl has also brought us a stunning new TV spot for this year's biggest summer attraction "Prince of Persia: the Sands of Time". You can check out the action packed teaser bellow. It promises a lot of epic and exotic adventure, just the way I like it, similar to legendary "The Mummy" franchise.
As you know the team that brought the "Pirates of the Caribbean" trilogy to the big screen, Walt Disney Pictures and Jerry Bruckheimer Films is bringing us this epic action-adventure set in the mystical lands of Persia. A rogue prince (Jake Gyllenhaal) reluctantly joins forces with a mysterious princess (Gemma Arterton) and together, they race against dark forces to safeguard an ancient dagger capable of releasing the Sands of Time—a gift from the gods that can reverse time and allow its possessor to rule the world. The movie is out May 28th.