Well, this way or another, it seems young Taylor Lautner will play a toy hero in a Hollywood movie. Although there were gossips before how he could be new Max Steel from Mattel's toyline, Universal Pictures have announced this weekend that Taylor Lautner will play the title character in the upcoming 3D superhero adventure "Stretch Armstrong" planned for 2012. 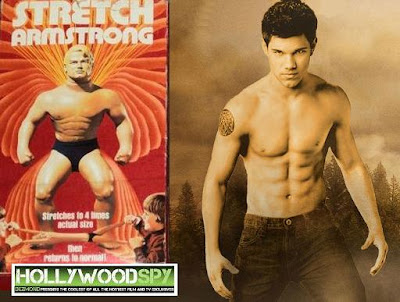 The 3D superhero adventure, based on Hasbro's famous toy action figure, will use Lautner's global popularity among kids and teenagers to score success at the box office. As one of the producers said about Taylor: He brings the perfect balance of energy and athleticism to the role of an unlikely super hero with a fantastic super power. Academy Award-winning producer Brian Grazer will team with Hasbro to bring Stretch Armstrong to life.
Posted by DEZMOND at 6:44 PM