After a few unsuccessful years in Hollywood, Antonio Banderas has taken things into his own hands so he will produce, write and direct a biopic on Boabdil according to "FirstShowingNet". The exotic historical movie will tell the story of Abu Abdullah Muhammad XII, the last Muslim ruler of the Emirate of Granada in Spain. Despite the foreign setting and characters, the film will be shoot completely in English but not before 2012. since Banderas hasn't found financing yet. Antonio Banderas hasn't given himself the main role but he will do a supporting one as General Gonzalo de Cordoba, who captured the kingdom for the Christians. 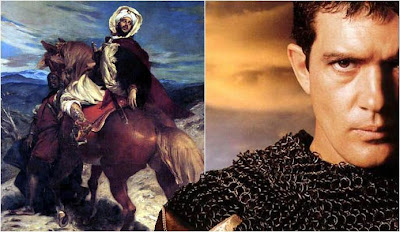 Boabdil spent many years fighting his own father and uncle for the throne, he also invaded Castile, but after many battles he had to surrender the city of Granada to Ferdinand and Isabella, king and queen of Castile and Aragon. The spot from which Muhammad XII looked for the last time on Granada while his royal party was moving to exile is known today as "the Moor's last sigh". King Ferdinand celebrated the conquest of Granada by taking Boabdil's daughter as one of his mistresses, and she became the mother of one of his illegitimate sons, after which she became a nun.
Posted by DEZMOND at 10:14 PM