"DAREDEVIL" WILL DARE TO APPEAR IN CINEMAS AGAIN 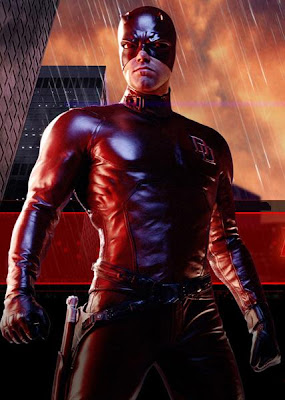 Marvel superhero is coming back to cinemas. Apparently Fox is giving the reboot treatment to "Daredevil". David Scarpa ("The Day the Earth Stood Still") has been hired to write the new script and Peter Chernin will produce. It seems that one of the reasons for the remake is so Fox can retain the rights to the property, otherwise it will revert back to Marvel, which was purchased by Disney last year.
As you know Ben Affleck has played this guy who is blind but has a heightened "radar sense" that allows him to see far better than any man. He works as a respected criminal attorney, but after he's done his day job he takes on a secret identity as "The Man Without Fear" Daredevil, the masked avenger that patrols the neighborhood of New York City to combat the injustice that he cannot tackle in the courtroom.
Posted by DEZMOND at 6:25 PM