Once an emperor always an emperor: after playing Caesar in legendary "Rome" Ciaran Hinds will become a Martian emperor in "John Carter of Mars". With James Purefoy and Polly Walker he's the third star of "Rome" who will jump from A.D. to distant future. Here's what he said about shooting the upcoming sf blockbuster in a recent interview: 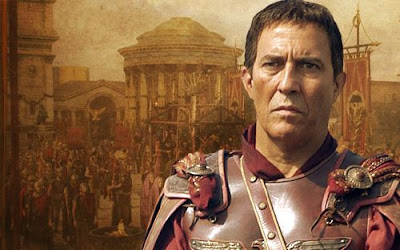 They are shooting the film at the moment. I have a small role in that. I have already shot on it for a couple of days. Then I go back to the set in March to shot for another six or eight days. I'm playing Tardes Mors, one of the leaders of Mars. I am the father of the female protagonist. She is played by Lynn Collins. Andrew Stanton is directing it. He shot "Finding Nemo" and "Wall-E". Those wonderful films. He had thought of me to play one kind of leader on Mars. It was a thrill to meet him knowing he'd made these classic films.
Ciaran will also appear as Albus Dumbledore's younger brother Aberforth in "Harry Potter and the Deathly Hollows".
Posted by DEZMOND at 9:22 PM