Now this sounds totally crazy. According to "The Hollywood Reporter", William Shatner will star in the new CBS pilot, "Shit My Dad Says" based off a Twitter phenomenon. 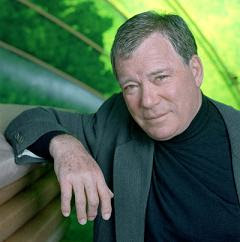 The story is about the real Twitter account created by Justin Halpern, a 29-year-old who moved back in with his parents and posts bizarre, profane statements that his 73-year-old father says in their daily conversations. Halpern launched the account in August and has amassed 1.1 million followers since then. Halpern co-wrote the pilot script and will produce the pilot with "Will & Grace" creators David Kohan and Max Mutchnick. The project received a script commitment in November but with Shatner on board, the pilot has been greenlit for production. Off course the title might get changed if the pilot goes to series :))
Posted by DEZMOND at 6:55 PM