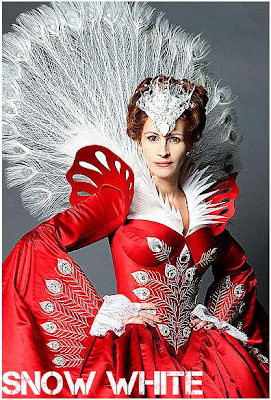 SNOW WHITE which premieres next March directed by visual genious Tarsem Singh (the helmer of visually mesmerizing films THE CELL and THE FALL). As you can see from the pictures the film will have surreal and extremely imaginative and vivid sets, costumes and visuals. The images reveal Lily Collins as Snow White, Armie Hammer as Prince, Julia Roberts as the Evil Queen and Nathan Lane as queen's timid servant.  The story will follow an evil queen and an exiled princess who struggle for control of their kingdom in a spirited adventure 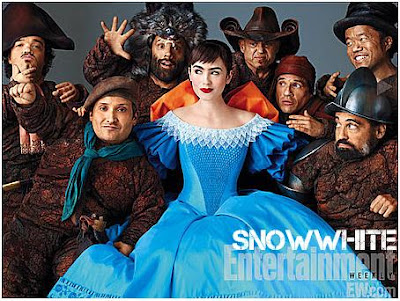 comedy, filled with jealousy, romance and betrayal, that will capture the imagination of audiences the world over. Unlike the rival project SNOW WHITE AND THE HUNTSMAN, which will be released a few months after this one and will go for gritty and dark 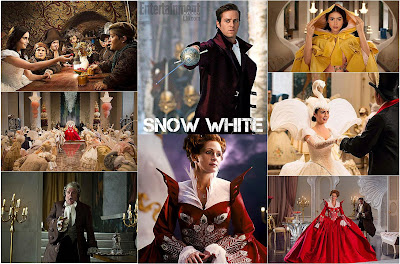 action, Tarsem's SNOW WHITE will go for the vivid and picturesque visuals and charming humor. Click on the pictures to see them full size. And click to read the full spotlight on the film.


HOLLYWOOD SPY HEADLINES
Deadline reports that Paul Walker has signed on to star in HOURS,  as a father trying to keep his newborn daughter alive in a New Orleans hospital 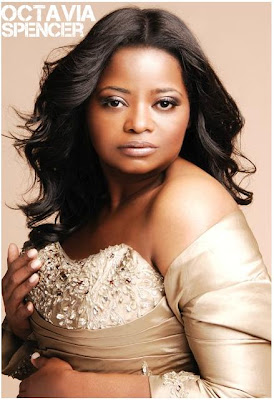 in the aftermath of Hurricane Katrina. According to "Variety", TWILIGHT producers are making a strange film IN THE FLESH, which will center on a spirit who has been dead for 130 years and still has not found a way to move on. After meeting another ghost, they discover how to inhabit a mortal body whose spirit has died. Lovely Octavia Spencer, who stole the show this summer in THE HELP, will join Diablo Cody's LAMB OF GOD, as a card dealer in a Vegas casino in which the lead character comes when she loses her faith after a plane crash and then finds her true self.
Here it is, the trailer for one of the films we've been waiting for a long time now - MY WEEK WITH MARILYN which premieres November 4th. It's set in the early summer of 1956, when young Colin Clark (amazing Eddie Redmayne), just down from Oxford 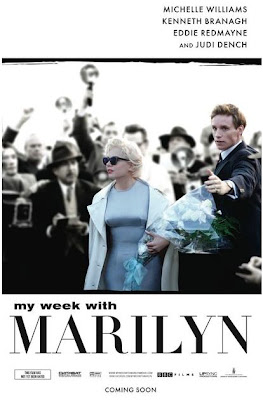 and determined to make his way in the film business, worked as a lowly assistant on the set of "The Prince and the Showgirl", the film that famously united Sir Laurence Olivier (Kenneth Branagh) and Marilyn Monroe (brilliant Michelle Williams), who was also on honeymoon with her new husband, the playwright Arthur Miller (Dougray Scott). Nearly 40 years on, his diary account "The Prince, the Showgirl and Me" was published, but one week was missing, and this was published some years later as MY WEEK WITH MARILYN. This is the story of that week. When Arthur Miller leaves England, the coast is clear for Colin to introduce Marilyn to some of the pleasures of British life: an idyllic week in which he escorted a Monroe desperate to get away from her retinue of Hollywood hangers-on and the pressures of work. The magnificent cast also includes Judi Dench, Dominic Cooper, Derek Jacobi, Julia Ormond...

PS! HAVE YOU NOTICED THAT HOLLYWOOD SPY HAS CROSSED THE MAGICAL LINE OF 800,000 VISITORS YESTERDAY? HOLLYWOOD SPY LOVES YOU AND THERE'S NOTHING YOU CAN DO ABOUT IT!
Posted by DEZMOND at 12:00 AM