According to "The Hollywood Reporter", Tom Cruise is in negotiations to take the lead role in WE ARE MORTALS, which was previously known as ALL YOU NEED IS KILL, a movie 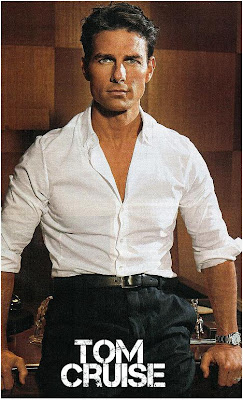 adaptation of a Japanese manga set in an alien invaded distant future world. When a new recruit (Tom Cruise) is killed in action, he is forced to relive the brutal battle of that day and the events leading up to it over and over again. Through this, he becomes a better warrior, and discovers a way to beat the aliens in battle. The role was previously linked with Brad Pitt.  This is not Cruise's only sf role, since he is also starring in HORIZONS, as a man who lives in the clouds above Earth and heads to its surface to repair drones that essentially keep the planet safe from an alien race that has all but wiped out humanity. Down there he meets a mysterious girl.
_________________________________________________
Check out a cool new poster for a film I've written about last year, apocalyptic thriller THE DIVIDE which should finally hit cinemas January 2012. Milo Ventimiglia, Michael Biehn and Rosanna Arquette star as nine strangers, all tenants of a New York high rise apartment, who 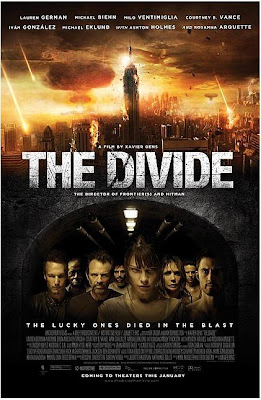 escape a nuclear attack by hiding out in the building's bunker-like basement. Trapped for days underground with no hope for rescue, and only unspeakable horrors awaiting them on the other side of the bunker door, the group begins to descend into madness, each turning on one another with physical and psycho-sexual torment. As supplies dwindle, and tensions flare, and they grow increasingly unhinged by their close quarters and hopelessness, each act against one another becomes more depraved than the next. While everyone in the bunker allows themselves to be overcome by desperation and lose their humanity, one survivor holds onto a thin chance for escape even with no promise of salvation on the outside. Click to watch the thrilling trailer I posted almost two years ago!
_______________________________________________
Your trailer treat for today is the second trailer for the modern movie adaptation of Shakespeare's play CORIOLANUS, shot 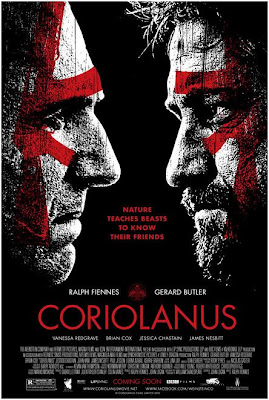 last year in Serbia with Gerard Butler and Ralph Fiennes (who is also the director). Coriolanus' (Ralph Fiennes), a revered and feared Roman General is at odds with the city of Rome and his fellow citizens. Pushed by his controlling and ambitious mother Volumnia to seek the exalted and powerful position of Consul, he is loath to ingratiate himself with the masses whose votes he needs in order to secure the office. When the public refuses to support him, Coriolanus's anger prompts a riot that culminates in his expulsion from Rome. The banished hero then allies himself with his sworn enemy Tullus Aufidius (Gerard Butler) to take his revenge on the city.
Posted by DEZMOND at 12:00 AM