Well, you can't really see much on this poster except for the bare chested Taylor Kitsch and some red letters :) but it's the first teaser poster for my most anticipated upcoming film (beside Tarsem's IMMORTALS) Andrew Stanton's space opera JOHN CARTER (previously OF MARS). Coming to theaters next 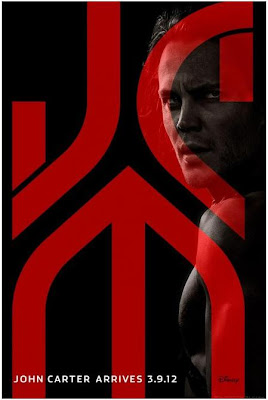 March, the film is set on the exotic planet following a war-weary, former military captain John Carter (Taylor Kitsch), who is inexplicably transported to Mars where he becomes reluctantly embroiled in a conflict of epic proportions amongst the inhabitants of the planet, including Tars Tarkas (Willem Dafoe) and the captivating Princess Dejah Thoris (Lynn Collins). In a world on the brink of collapse, Carter rediscovers his humanity when he realizes that the survival of Barsoom and its people rests in his hands. The stunning cast also includes ROME's Polly Walker and James Purefoy, Mark Strong, Ciaran Hinds, Samantha Morton, Dominic West. Click to read the whole detailed post on the film (with some very indecent pictures :).

SHORT HEADLINES As "Playlist" reports, Relativity has bought Gerard Butler's MACHINE GUN PREACHER from Lionsgate in order to make it an Oscar vehicle for the Scottish 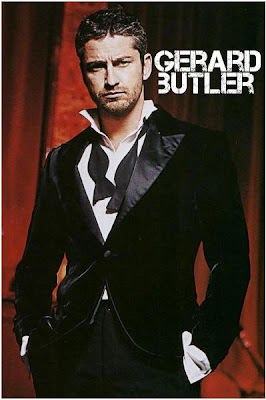 actor who plays  a former drug-dealing Hell’s Angel who returns to religion and opens an orphanage in Sudan, after which he also forms a militia to prevent the children from being turned into child soldiers. And speaking of Oscars, the Academy had decided that next year the Best Film category can have between five and ten nominated films and not all ten like this year. The films will have to have 5% of the first place votes to get nominated. Russel Crowe is in talks to play Superman's real dad Jor El from Krypton in MAN OF STEEL in which Kevin Costner plays the adoptive father. 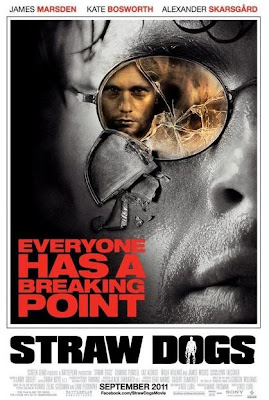 Check out the first, rather beautiful, poster for action thriller STRAW DOGS which premieres this September with impossibly hot cast including James Marsden, Alexander Skarsgaard, Dominic Purcell and Kate Bosworth. The film revolves around a Los Angeles screenwriter David Sumner (James Marsden) who decides to move with his wife (Kate Bosworth) to her hometown somewhere deep South. There, while tensions build between them, a brewing conflict with locals becomes a threat to them both. This is off course a remake of Dustin Hoffman's 70's classic but with a changed setting.
LINK OF THE DAY Budd over at SCIFI MEDIA is giving away three copies of Scott Sigler's INFECTED novel!
Posted by DEZMOND at 12:00 AM