SHORT HEADLINES Since Tim Burton decided not to direct MALEFICENT with Angelina Jolie, according to "MovieWeb" the new one interested to take the helm is Guillermo Del Toro who admitted that he has a collection of dozens of 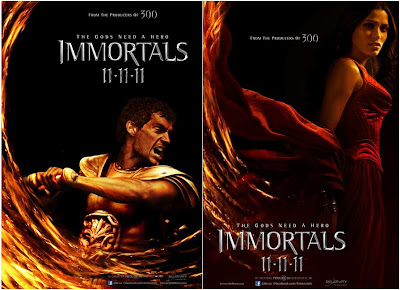 Maleficent figures and is a huge fan of the Sleeping Beauty tale. Now, this is certainly interesting: Ian McShane, whom we loved in PILLARS OF THE EARTH has joined SNOW WHITE AND THE HUNTSMAN. He will portray Caesar the Dwarf leader next to Charlize Theron, Sam Claflin and Chris Hemsworth! 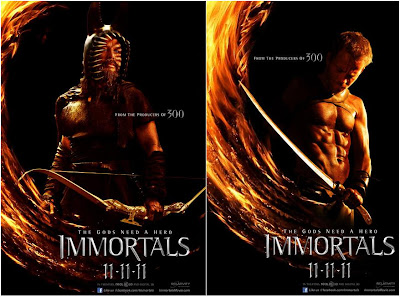 And more from Tarsem's IMMORTALS today :) We've already seen the amazing posters with the Gods appearing in the movie, and now I have the posters with the main characters Henry Cavill as Theseus, Stephen Dorff as his slave, Freida Pinto as Phaedra and evil King Hyperion played by Mickey Rourke. 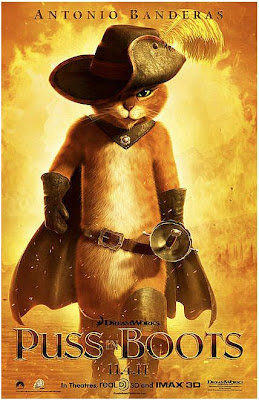 Dreamworks has just released a hilarious and delightful new trailer for the super charming and positively adorable PUSS IN BOOTS film, which comes to cinemas this November. With the adorable voices from Antonio Banderas and Salma Hayek, the SHREK spin-off will go back in the past, way before Puss ever met Shrek, when our suave and furry feline hero went on a swashbuckling ride, teamed up with mastermind Humpty Dumpty and the street-savvy Kitty to steal the famed Goose that lays the Golden Eggs. The film is directed by Chris Miller who helmed SHREK 3 and he also worked on MADAGASCAR and MONSTERS VS ALIENS.
LINK OF THE DAY be sure to visit our dear Emily White's blog. Her fantasy saga ELEMENTAL is coming out soon!
Posted by DEZMOND at 12:00 AM