Although I'm not personally overly excited about it, new sf hit directed by John Favreau COWBOYS & ALIENS could very easily become the biggest blockbuster of the summer 2011 after it premieres on July 29th. Having a James Bond Daniel Craig 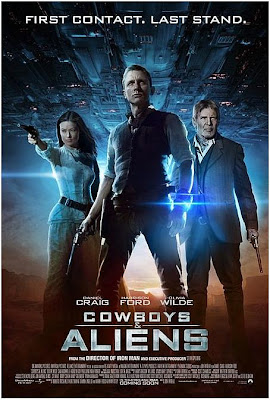 and an Indiana Jones Harrison Ford in the cast alongside gorgeous Olivia Wilde, with the plot in which cowboys, gangsters and Indians fight against aliens, the film could attract a big audience.


COWBOY & ALIENS TIDBITS
The story was written by Roberto Orci and Alex Kurtzman who brought us the brilliant script of STAR TREK. The cast also includes Sam Rockwell and Keith Carradine. Robert Downey Jr and Eva Green were the first candidates for the lead roles but thankfully they didn't get them! Harrison Ford didn't want to wear a hat in the film but he had to since he plays a cowboy. Film budget was around $100 million! Olivia Wilde has a bare chested scene in the film in front of the huge mass of Indians. 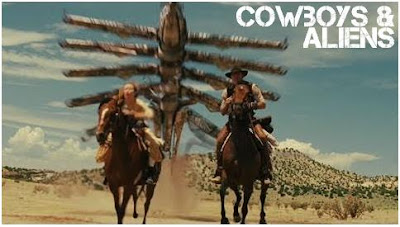 THE STORY OF THE FILM
The story is set in 1873 in Arizona. A stranger (Daniel Craig) with no memory of his past stumbles into the hard desert town of Absolution. The only hint to his history is a mysterious shackle that encircles one wrist. What he discovers is that the people of Absolution don't welcome strangers, and nobody makes 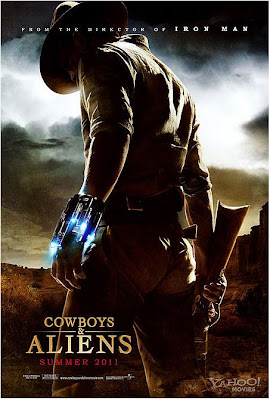 a move on its streets unless ordered to do so by the iron-fisted Colonel Dolarhyde (Harrison Ford). It's a town that lives in fear.
But Absolution is about to experience fear it can scarcely comprehend as the desolate city is attacked by marauders from the sky. Screaming down with breathtaking velocity and blinding lights to abduct the helpless one by one, these monsters challenge everything the residents have ever known.
Now, the stranger they rejected is their only hope for salvation. As this gunslinger slowly starts to remember who he is and where he's been, he realizes he holds a secret that could give the town a fighting chance against the alien force. With the help of the elusive 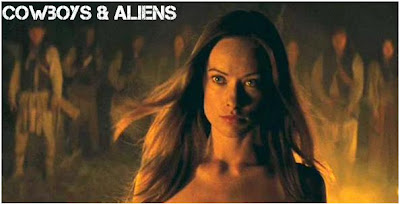 traveler Ella (Olivia Wilde), he pulls together a posse comprised of former opponents, townsfolk, Dolarhyde and his boys, outlaws and Apache warriors, all in danger of annihilation. United against a common enemy, they will prepare for an epic showdown for survival.
Posted by DEZMOND at 12:00 AM