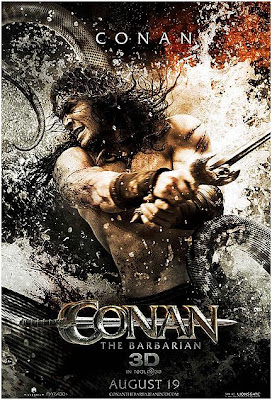 Although August is usually considered a dumpster place for summer flicks of suspicious quality, this August will bring us something rather epic and visually stunning, the premiere of this summer's hottest remake CONAN THE BARBARIAN in which Jason Momoa takes the role made famous earlier by Arnold Schwarze negger. Today you can check out some brilliant new posters and the highly exciting trailer. It might not be the best of films plotwise, but it will surely bring us breath taking action, stunning sets and costumes, glorious CGI and of course lots of epic battle. 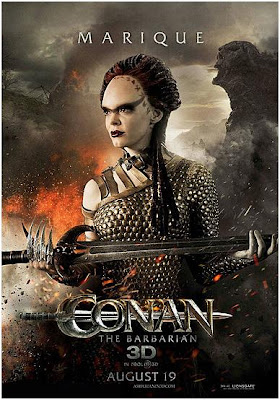 After starring in BAYWATCH and STARGATE ATLANTYS, Jason Momoa's career is currently taking an epic turn with his role as Conan and his role of Khal Drogo in HBO'S epic show GAME OF THRONES.  Stunning Rachel Nichols, who plays the lead female role of Tamara, is best remembered as Scarlett from G.I.JOE film. Before Momoa got the lead role two TV hunks Kellan Lutz and Jared Padalecki were in the run to play the famous Barbarian. Mickey Rourke and Dolph Lundgren were in the run for the role of Corin, Conan's father. 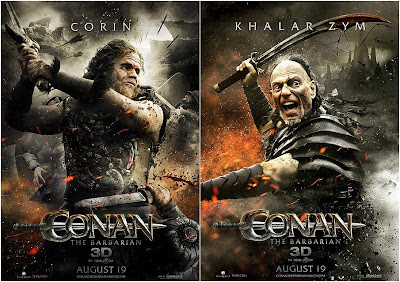 Story begins when Khalar Singh (Stephen Lang), an old friend of Conan's father, Corin (Ron Perlman), arrives in Cimmeria seeking Corin's help in finding Ilira, the "Lost Queen of Acheron". When Corin refuses, Khalar and his Aquilonian mercenaries attack. Corin and the other Cimmerians are killed but Conan escapes. Conan becomes a thief and joins a troup of acrobats, but eventually seeks revenge against Khalar for killing his father. In the meantime, 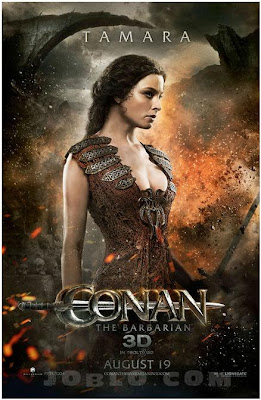 Khalar has found and captured Ilira on his own but her bodyguard Tamara (Rachel Nichols) escapes. Tamara meets Conan and they both travel to Khalar's city, Khor Khala. This quest that begins as a personal vendetta for the fierce Cimmerian warrior soon turns into an epic battle against hulking rivals, horrific monsters, and impossible odds, as Conan realizes he is the only hope of saving the great nations of Hyboria from an encroaching reign of supernatural evil.
The cast also includes Rose McGowan as the evil witch Marique and Said Taghmaoui as Ela-Shan, and the film is directed by Marcus Nispel known for directing music videos and brilliant Viking adventure PATHFINDER with Karl Urban.

LINK OF THE DAY Lovely L.G. Smith reveals that her Inner Doubt Wears a Thong :)
Posted by DEZMOND at 12:00 AM