Fox Television is ready to premiere the exciting new TV series TERRA NOVA  in special two night episodes on May 23rd and May 24th.  You can check out some of the brand new pictures from the show today at HOLLYWOOD SPY.

Produced by famous Stephen Spielberg,  this epic family adventure 85 million years in the making,  will follow an ordinary family embarking on an incredible journey back in time to prehistoric Earth as a small part of a daring experiment to save the human race. In the year 2149 the world is dying. The planet is overdeveloped, overcrowded and overpolluted. With no known way to reverse the damage to the planet, scientists discover a portal to prehistoric Earth. This doorway leads to an amazing world, one that allows for a last-ditch effort to save the human race... a second chance to rebuild civilization and get it right this time. 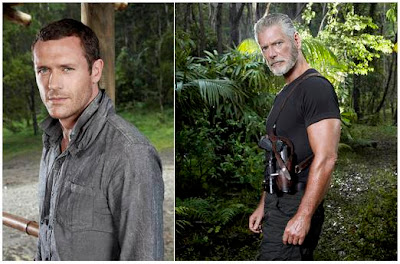 The series centers on the Shannon family as they join the Tenth Pilgrimage of settlers to TERRA NOVA, the first colony established in this beautiful yet forbidding land led by its founder Commander Nathaniel Taylor (Stephen Lang from AVATAR). Jim Shannon (Jason O' Mara from LIFE ON MARS), a devoted father with a checkered past, guides his family - wife Elisabeth (Shelley Conn) and children Josh (Landon Liboiron), Maddy (Naomi Scott) and Zoe (Alana Mansour) - through this new land of limitless beauty, mystery and terror. In addition to blue 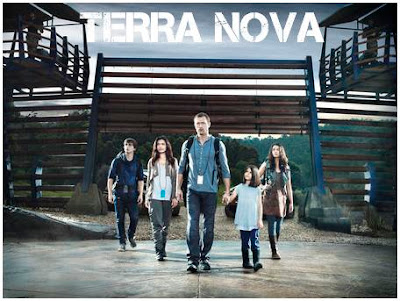 skies, towering waterfalls and lush vegetation, TERRA NOVA offers new opportunities and fresh beginnings to its recent arrivals, but the Shannons have brought with them a familial secret that may threaten their citizenship in this utopia. These adventurers soon discover that this healthy, vibrant world is not as idyllic as it initially appears. The areas surrounding TERRA NOVA are

teeming with danger, and not just of the man-eating dinosaur variety. The Shannons will come to suspect that not everyone on this mission has the same idea of how to best save mankind, in fact, there may be forces intent on destroying this new world before it even begins.

And I wanted to thank  all of you darling freaks who have published posts on HOLLYWOOD SPY'S ANNUAL AWARDS colouring  the whole blogosphere in my trademark green colour. Thanks to Clarissa, Jamie,Alex, Matt,  Lyndylove, Melissa, Leigh, Kelly ,Vics (who was amazing because she made paintings of many of the red carpet blogging stars), Ella, Emily and Masy for showing us their gala outfits, and special thanks to Arlee and RaShelle who were amazing enough to even take real pics of them in the gala outfits, starting the trend of wearing formal blankets at galas in the first case or stunning the audience with their sexiness in the second case :) The best thing for sure is that I've seen many of you becoming each others new followers and friends after our gala yesterday, and I'm extremely happy about it. The blogosphere was a happy place yesterday!
Posted by DEZMOND at 1:47 PM