Just a few hours ago Monaco, the little princedom in Europe, has got its new princess. Prince Albert has married lovely Charlene 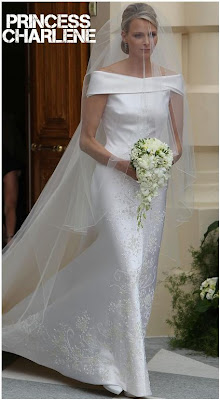 Wittstock,and the big news is - everything at the wedding seemed better than what we saw at the British royal wedding in April. Everything was more stylish, more relaxed, and there was none of that cold, snobbish and reserved atmosphere from the London's wedding.
The Monaco wedding was held in the fairy tale courtyard of the royal palace which gave it an almost Elven vibe since it was in the open place filled with stunning staircases, flowers and colonnades. And the wedding couple was also much more relaxed and beautiful. Albert was very dashing in his white uniform, while angelic Charlene looked tender, serene and gracious in her white Giorgio Armani gown. Although it could've been a bit more revealing and unique, the wedding gown did 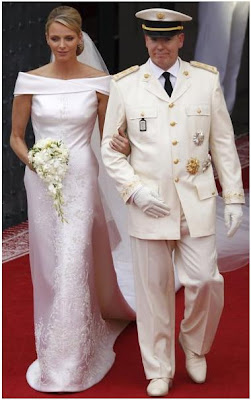 suit her personal style, since Charlene is an Olympic athlete. I thought her hair looked absolutely magnificent with diamond studded golden hairpiece underneath the long veil.
The wedding was even packed with much more emotions than William's and Kate's, with lots of tender kisses being exchanged between Albert and Charlene both at the civil wedding on Friday and the religious one on Saturday. While he was slipping the ring on her finger he winked, and while she was slipping the ring on his finger she gave him a broad smile. And the most touching moment was when Charlene started crying in the little chapel where two young singers greeted the royal couple with a touching serenade when she came to give her wedding bouquet to Virgin Mary. 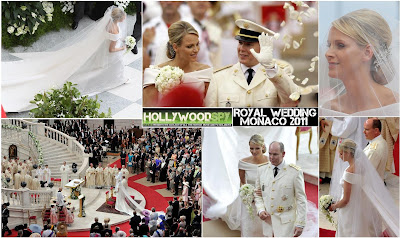 Her Serene Highness Charlene is now the first Monaco princess after the famous and beloved Grace Kelly, Prince Albert's mother. The royal wedding and the new couple will certainly bring back glamour and glitz to the idyllic Mediterranean country. 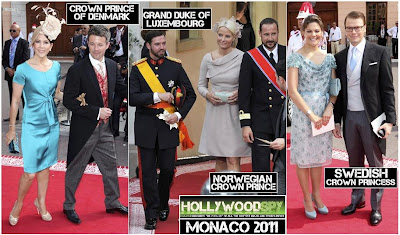 Beside the crowned heads of Europe Albert, King of Belgium, the king and queen of Sweden, prince Frederik of Denmark, prince Alexander of Serbia, Norway prince, and Felipe of Spain, the wedding guests also included Gerard Butler, Giorgio Armani, Karl Lagerfeld, Karolina Kurkova, Roger Moore  ... Click on the pictures to see them in full size. 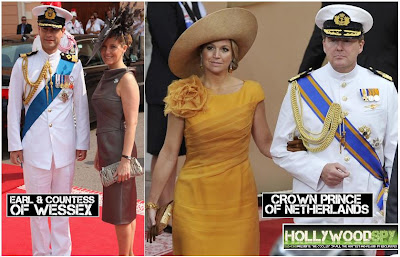