Oooh, I'm totally loving this: according to "Variety" our favourite vampire, favourite blond and favourite Swedish actor Alexander Skarsgard is teaming up with Warner Bros. and he will both produce 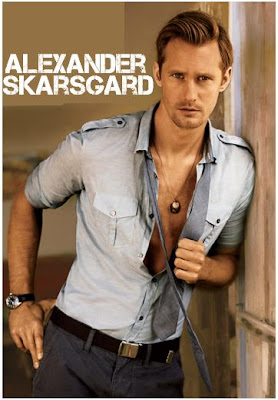 and take the lead role in a huge epic THE VANGUARD in which the story will  revolve around two Viking warrior brothers who toil to return to Sweden after being banished to North America. The studio would like this to be a tentpole project in the line of GLADIATOR and BRAVEHEART. The film will be written by emerging screenwriter Chris Boal who is also writing the JULIUS CAESAR epic I wrote about last week. And we shall also watch Skarsgard in BATTLESHIP, in the remake of STRAW DOGS and in Lars Von Trier's MELANCHOLIA.
________________________________________________
Graphic novel RUST will get an animated movie adaptation at 20th Century Fox. Set in the prairie lands of an unknown time after a devastating world war, this high octane adventure follows Jet Jones, a mysterious boy with the jetpack on his back, who crashes onto a farm chased by a giant decommissioned war robot!Ah, 300: BATTLE OF ARTEMISIA, the prequel to the famous Spartan epic which will follow the rise of the Persian ruler Xerxes, has found its director in Noam Murro (SMART PEOPLE, DIE HARD5) while his main rival for the job, Jaume Collet Serra has got the helm of AKIRA instead. And today you can also check out the costume that our dear Karl Urban will wear in the remake of JUDGE DREDD about a futuristic cop who also acts as judge as soon as he catches a criminal.
_________________________________________________
And here's the first trailer for extremely charming THE PIRATES! BAND OF MISFITS, a stop motion 3D animated film coming to cinemas in 2012. In it, Hugh Grant is the luxuriantly bearded Pirate Captain - a boundlessly enthusiastic, if somewhat 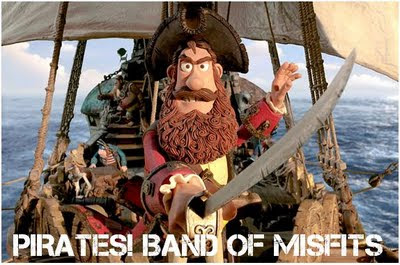 less than successful, terror of the High Seas. With a rag-tag crew at his side (Martin Freeman, Brendan Gleeson, Russell Tovey and Ashley Jensen), and seemingly blind to the impossible odds stacked against him, the Captain has one dream: to beat his bitter rivals Black Bellamy (Jeremy Piven) and Cutlass Liz (Salma Hayek) to the much coveted Pirate Of The Year Award. It's a quest that takes our heroes from the shores of exotic Blood Island to the foggy streets of Victorian London. Along the way they battle a diabolical queen (Imelda Staunton) and team up with a haplessly smitten young scientist (David Tennant), but never lose sight of what a pirate loves best: adventure!
Posted by DEZMOND at 12:00 AM