Now, this is a piece of news which makes me personally happy: "Variety" reports that director P.J. Hogan and Toni Collette 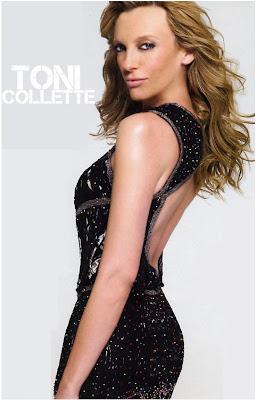 will work again after their collaboration in beloved classic MURIEL'S WEDDING. In Hogan's new film MENTAL, Collette will play a crazy hotheaded hitchhiker brought on to nanny five girls by their father, a philandering politician, after he hospitalizes his wife for a nervous breakdown. The cast also includes Liev Schreiber and Anthony LaPaglia! Over at Comic Con Legendary pictures has revealed concept art for their PARADISE LOST in which Lucifer and Michael, God's greatest archangels, share the bond of extraordinary friendship until God produces his greatest creation: Man. Unable to remain subservient to God if it means bowing down to humanity, Lucifer

begins his dark descent and is cast out - only to plot his revenge. This huge epic which will have Bradley Cooper as Lucifer will also have some huge aerial battles directed by Alex Proyas! and the Wild West is a fading memory, and Wyatt Earp is making ends meet as a detective in Los Angeles. To help the late Doc Holliday's son, Wyatt goes east, where his onetime deputy, Bat Masterson, is New York's top sportswriter. Wyatt and Masterson face a showdown with a new breed of mobsters led by Brooklyn's brutal young Al Capone, in a takeover of young Holliday's hot new speakeasy. As the '20s (and machine guns) roar, the lawless lawmen enter a glittering world of showgirls and cafe society, of gangsters and gamblers, where their legends may even end as Scarface Al's begins.

concluded SPARTACUS BLOOD AND SAND the gladiator rebellion continues and begins to strike fear into the heart of the Roman Republic in the second season. Gaius Claudius Glaber (Craig Parker) and his Roman troops are sent to Capua to crush the growing band of freed slaves that Spartacus leads before it can inflict further damage. Spartacus is presented the choice of satisfying his personal need for vengeance against the man that condemned his wife to slavery and eventual death or making the larger sacrifices necessary to keep his budding army from breaking apart.

PS it seems you liked both the royal post on Sunday and yesterday's bunch of new pics since HOLLYWOOD SPY had almost 3,000 visitors this Monday ;) I also checked some specific stats, and lots of people have been brought here from Google after typing in Hayley Atwell naked or nude :) Guess those who went to watch CAPTAIN AMERICA really liked her :)
Posted by DEZMOND at 12:00 AM