According to "MovieWeb" new sf epic HORIZONS (they changed the title from OBLIVION) in which Tom Cruise will star as Jack, a
man who lives in the clouds above Earth and heads to its surface to repair drones that essentially keep the planet safe from an alien race that has all but wiped out humanity, is now trying to find its lead actress. According to latest gossips competing for the role of the girl whom Jack will find on the surface are Olivia Wilde, Olga Kurylenko (click for the naughtier pic) and Jessica Chastain (who is suddenly appearing in lots of films THE HELP, THE DEBT, CORIOLANUS, THE TREE OF LIFE... but I'm not sure why since she's rather unappealing and cold). The film is directed by TRON:LEGACY's Joseph Kosinski.


SHORT HOLLYWOOD HEADLINES
Following the trend of "each new day brings a new remake or a revival of the old classic" is GHOSTBUSTERS III which is ready to start shooting next Spring with Dan Aykroyd, Sigourney Weaver, Anna Faris
and possibly Bill Murray as well. Although it will have the old actors as well, the story will have them hand the equipment and the franchise down to a new generation of Ghostbusters. Well this is a project that suddenly got interesting to me: Olivia Wilde and Sam Rockwell have replaced rather uncharismatic Jennifer Garner and Jeremy Renner in BETTER LIVING THROUGH CHEMISTRY which also has Judi Dench in the cast. The story follows a pharmacist, stuck in a dead-end marriage, who starts an affair with a trophy wife but when he introduces her to prescription drugs, things spiral out of control as they hatch a plot to kill her husband.

Something that appeared all around the net yesterday is the trailer for LOCKE & KEY, the show which Fox didn't greenlit even though the pilot episode looks more than interesting. Maybe it will 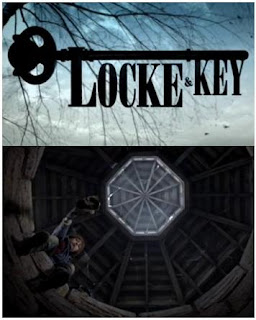 find another broadcaster? With a rather interesting cast including gorgeous Sarah Bolger from THE TUDORS, gorgeous pop star Jesse McCartney and LOTR star Miranda Otto, the story follows a family which moves into Keyhouse, a New England mansion with fantastic doors that transform all who dare to walk through them. The building is also home to a hate-filled and relentless creature that will not rest until it forces open the most terrible door of them all. Check out the creepy and interesting trailer and tell me what you think.
Posted by DEZMOND at 12:00 AM