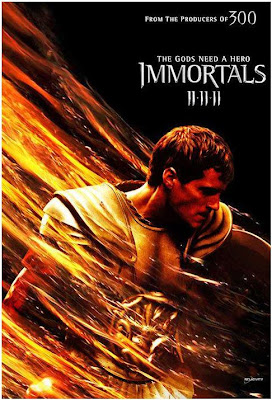 Those of you who are regular visitors of HOLLYWOOD SPY, know that my most anticipated film of the decade is IMMORTALS by visual genius Tarsem Singh (THE FALL, THE CELL) which just got its first, absolutely mesmerizing, posters released. These five character posters show our new SUPERMAN Henry Cavill as the brave Theseus, Luke Evans as Zeus, Kellan Lutz as Poseidon, Isabel Lucas as Athena and Daniel Sharman as Ares.
Coming out November 11th and produced by people standing behind famous Spartan epic 300, this thrilling adventure will be set in the time after the Gods had won their mythic struggle against the 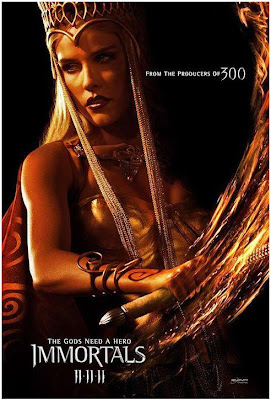 Titans. But there's a new danger: Mad with power, King Hyperion (Mickey Rourke) has declared war against humanity. Amassing a bloodthirsty army of soldiers disfigured by his own hand, Hyperion has scorched Greece in search of the legendary Epirus Bow, a weapon of unimaginable power forged in the heavens by Ares.
Only he who possesses this bow can unleash the Titans, who have been imprisoned deep within the walls of Mount Tartaros since the dawn of time and thirst for revenge. In the king’s hands, the bow would rain destruction upon mankind and annihilate the Gods. 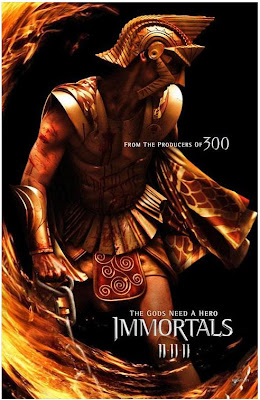 But ancient law dictates the Gods must not intervene in man’s conflict. They remain powerless to stop Hyperion…until a peasant named Theseus (Henry Cavill) comes forth as their only hope.
Secretly chosen by Zeus, Theseus must save his people from Hyperion and his hordes. Rallying a band of fellow outsiders, including visionary priestess Phaedra (Freida Pinto) and cunning slave Stavros (Stephen Dorff), one hero will lead the uprising, or watch his homeland fall into ruin and his Gods vanish into legend.
The cast also includes a bunch of other gorgeous young people in the roles of glorious Gods and mythical heroes: Corey Sevier as Apollo, Joseph Morgan as Lysander, Greg Bryk as Nycomedes, 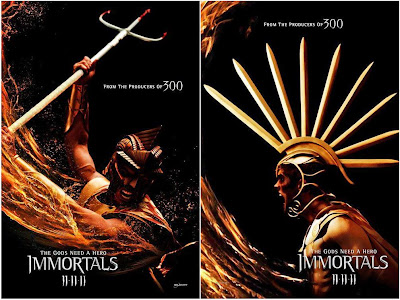 Steve Byers as Heracles, Peter Stebbing as Hellios, Romano Orzari as Icarus, Robert Maillet as Minotaur ... Costume design is done by amazing Eiko Ishioka whom we remember by stunning and absolutely gorgeous costumes from THE CELL, THE FALL, DRACULA ... The budget of the film was around $115 million. We are anxiously waiting for the first trailer.
Posted by DEZMOND at 12:00 AM