You know  how your Spy loves apocalyptic stories set in some impossible surroundings. Beside THE SNOW PIERCER with Chris Evans, Jamie Bell and Octavia Spencer, it seems we are getting another such apocalyptic winter set project:  THE COLONY, currently being shot in Canada, with Kevin Zegers, Bill Paxton and Laurence Fishburne, is set beneath the icy surface, where survivors of Colony Seven struggle as food supplies dwindle and temperatures continue to drop. Plagued by illness and internal conflict, the colonists suspect the worst when they mysteriously lose contact with Colony Five - the only other known settlement. Sam, a strong-willed mechanic with a tragic past, joins a team headed up by Briggs on a dangerous expedition to find out what happened. After a hellish trek, they discover a threat much worse than imagined, and now Colony Seven must win a savage battle to preserve the last of humanity. The film is set for next year release.

HOLLYWOOD SPY HEADLINES
As you've probably noticed, Hollywood has taken teens as their target audience and thus we get either morbidly dark flicks for puberty boys or shallow Twilight flicks for girls. Yet, another movie adaptation in the long line of YA novel adaptations will be the one for THE IRON TRIAL. It is an interesting one, since the book hasn't even been released yet, it is scheduled for 2014, and it will be a five book saga 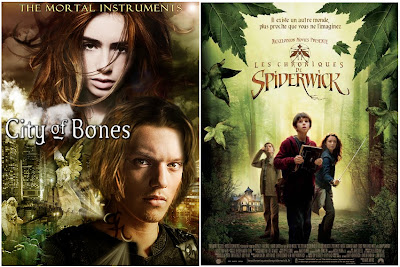 written together by two authors who already have their respective YA bestsellers - Holly Black (whose SPIDERWICK CHRONICLES have already been made into a film) and Cassandra Claire (whose THE MORTAL INSTRUMENTS are awaiting their film version with Lily Collins). Here's the official plot of their new saga: In this exciting new series, twelve-year-old Callum Hunt has grown up knowing three rules

by heart. Never trust a magician. Never pass a test a magician gives you. And never let a magician take you to the Magisterium. Callum is about to break all the rules. And when he does, his life will change in ways he can't possibly imagine.

And here's a nice piece of news for all of you who love comic books and super heroes. "Movie Web" reported this weekend that Warner Bros. and DC Comics will collaborate on the movie adaptation of DC's popular comic hero LOBO. The character is an interstellar bounty hunter and mercenary who travels the galaxy looking for his next target. The character was created in 1980s but became even more popular in the 1990s, when he was resurrected as a renegade biker. Two years ago there were talks that Guy Richie might direct the adaptation but he left the project in order to shoot SHERLOCK HOLMES. The film will now be helmed by Brad Peyton, who had a big hit this spring with JOURNEY II: THE MYSTERIOUS ISLAND.
Posted by DEZMOND at 12:00 AM