So, people, tell me how did you like the eight part $40 million historical mini series THE PILLARS OF THE EARTH which aired back in 2010? The poster of the show became one of the most Googled artworks HOLLYWOOD SPY 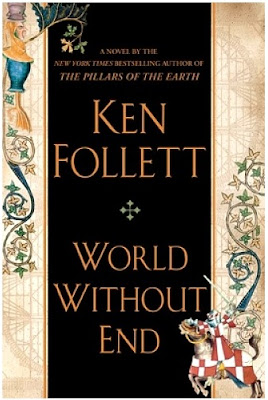 has ever done :) Beside giving us some of the currently hottest young stars from glorious Eddie Redmayne (who later on scored amazing roles in BIRDSONG and MY WEEKEND WITH MARYLIN and is shooting LES MISERABLES now), David Oakes (who scored the lead role in THE BORGIAS later on) and adorable Sam Claflin (who later on became Hollywood's hottest good with roles in PIRATES OF THE CARIBBEAN and SNOW WHITE AND THE HUNTSMAN) to Hayley Atwell (who ended up in CAPTAIN AMERICA), the show was also nominated for Globes and Emmys, and it was aired in dozens and dozens of countries around the world. Well, guess what, the series is getting a sequel, or not exactly the sequel but something like it(the story 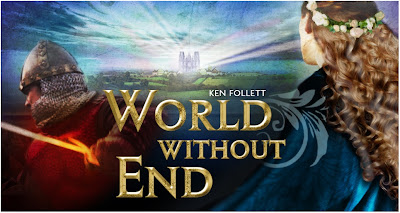 is set 200 years after PILLARS),  which is currently being shot in Hungary, Austria and Slovakia. The new series is based on another of Ken Follett's novels WORLD WITHOUT END, and is produced by the producers of THE TUDORS and THE BORGIAS and Ridley Scott and his brother Tony Scott. The book itself has been a huge bestseller in more than 30 countries around the world!


WORLD WITHOUT END STORY
A paid assassin is sent to murder a king. A mysterious knight flees to the countryside, hotly pursued by the Queen's men. Two teenagers witness an incident in the woods that will change the course of a nation. In the thriving town of Kingsbridge, the latest marketplace gossip is the strange circumstances of the King's death. The civil war is over, Kingsbridge's economy is robust and merchant coffers are full. 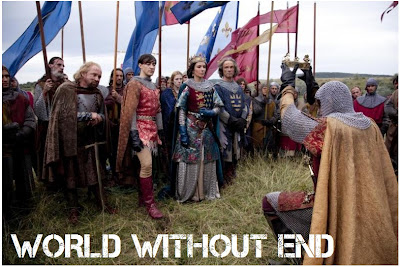 All is well in Kingsbridge until the two noble young men bring their wounded knight to the Priory to be doctored. Sir Thomas Langley surprises all by buying his sanctuary in the Church as a humble monk using a dowry from the Queen. What could he possibly have on Queen Isabella to warrant such support? 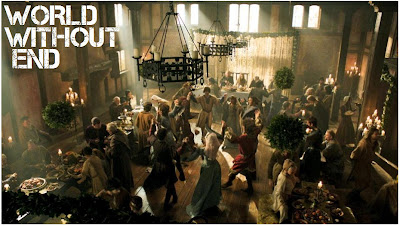 Without warning, Kingsbridge seems suddenly under siege. The Queen's ardent supporter, Sir Roland, marches in and usurps the Earldom of neighbouring Shiring, condemning the reigning lord to death as a traitor. Roland's list of men, who supported the old King against Her Majesty is long – and they will all hang. The rest must pay dearly in taxes to support her claim to the French Crown - marking the beginning of the 100 Year War. 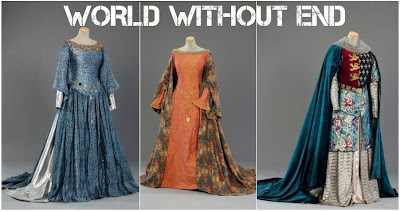 Caris, a visionary young woman, struggles to rise above the suffering and oppression in order to lead her people out of the dark times. In order to save Kingsbridge, Caris, along with her lover Merthin and Sir Thomas Langley, build a community that stands up to The Crown and The Church. Their courage inspires a nation and throughout Europe commoners and peasants stand up for their rights and revolt against their oppressors - a new age emerges. 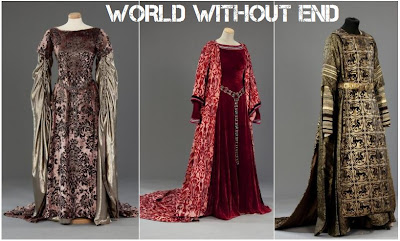 WORLD WITHOUT END CAST
The mini series is being directed by famous Michael Caton Jones from ROB ROY and BEYOND THE GATES. The rich and complex cast is being lead by a number of famous names as the story again mixes the

two of the above pictures you can see some of the costumes which will be seen in the show, and you can also visit WORLD WITHOUT END official site.

CAROLINE BOULTON EXCLUSIVE
Your HOLLYWOOD SPY has had the pleasure to talk with gorgeous and extremely dear British actress Caroline Boulton (ROBIN HOOD), who also stars in WORLD WITHOUT END, and here's what she exclusively told me 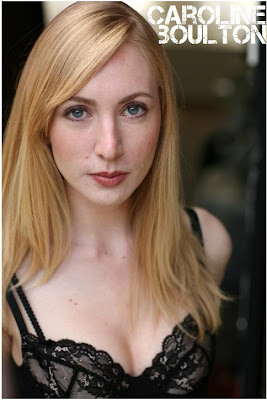 when I asked her how it was at the set, how did she like the costumes etc: "This sequel is set 200 years later and is based around the same town and descendants of the characters in the first Emmy winning series. It was a 6 month shoot but I had a truly fantastic time filming on the enormous sets. My costume was unbelievably detailed and would take a lot of help to put on each and every layer, I needed a lot of help each morning! Each and every costume was specially tailored to suit the characters traits. The beautiful attention to such thoughtful detail from the costume department was just mind blowing! The entire cast and crew were all absolutely wonderful, such total professionals in every department. I really am so excited and I just can't wait to watch it."
Posted by DEZMOND at 12:00 AM