Gorgeous British rose Emily Blunt, who was quite busy this winter with SALMON FISHING IN THE YEMEN next to Ewan McGregor, and THE MUPPETS in which she did a cameo of her role from THE DEVIL WEARS

PRADA acting as Miss Piggy's secretary in VOGUE, is, according to "Variety" in talks to take a female role in Doug Liman's sf epic WE MORTALS ARE (previously known as ALL YOU NEED IS KILL) in which the story revolves around a soldier (played but the MISSION IMPOSSIBLE star whose name we won't mention here since he is banned after he had said, in the mentioned film, that "he kills Serbs like flies") who finds himself reliving his last day after being killed by aliens in a long-running war. Each time he comes back to life, he finds himself becoming a better fighter. Emily should portray a woman who fights next to him. As you remember, Emily Blunt will be seen this year in sf film LOOPER next to Bruce Willis and Joseph Gordon Levitt and in romantic film THE FIVE YEAR ENGAGEMENT next to Jason Segel.

HOLLYWOOD SPY HEADLINES
After they've chosen Russell Crowe, instead of Christian Bale or 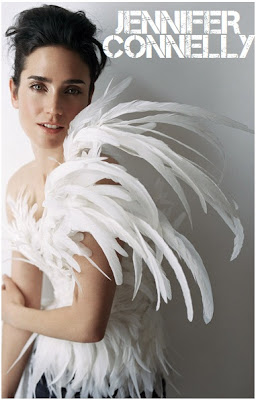 Michael Fassbender, for the lead role in Biblical sf epic NOAH, which will bring a very dark and edgy version of the famous legend, Darren Aronofsky has started choosing ladies in the cast too: according to "Movie Web" Jennifer Connelly, who is mostly known for her marriage with Paul Bettany and not for her roles, is in talks to join the film which would reunite her with Russell Crowe once again after A BEAUTIFUL MIND. She would play Naameh, Noah's wife. The same source says that young Irish star Saoirse Ronan might also join them in a supporting role. The film is currently set for March 2014. release!
Just a few days ago I mentioned that Liam Hemsworth, Harrison Ford and Gary

Oldman will star in Robert Luketic's thriller PARANOIA in which the story revolves around a young man who funds a lavish retirement party for a co-worker with company funds, and is caught by his boss. Accused of embezzlement, he agrees to spy for the boss to avoid prosecution. He is forced to infiltrate a rival company and steal information on a top-secret project. "Variety" reports today that X-MEN: FIRST CLASS and BATTLE: LOS ANGELES star Lucas Till has joined the cast as a co-worker and a friend of Liam's character. Lucas will also join Nicole Kidman and Matthew Goode in Wentworth Miller's STOKER.
Posted by DEZMOND at 12:00 AM