I think we are having an action Saturday today, my little freaks. First, "Deadline" reports that super charming Robert Luketic (LEGALLY

BLONDE) is preparing something different from what we would expect from him since he is working on espionage thriller PARANOIA which just got young Liam Hemsworth (the brother of Chris and boyfriend of Miley Cyrus) in the cast right beside Harrison Ford and Garry Oldman. This will be a movie adaptation of a novel by Joseph Finder in which the story revolves around a young man who funds a lavish retirement party for a co-worker with company funds, and is caught by his boss. Accused of embezzlement, he agrees to spy for the boss to avoid prosecution. He is forced to infiltrate a rival company and steal information on a top-secret project. Coming in the future, Liam also has ARABIAN NIGHTS epic with Anthony Hopkins and TIMELESS, a film about a man who is tormented by the things he left unsaid before his wife passed away so he uses the money his wife left him to build a time travel device, so he can see her one last time.

Since I know most of you like the kindest action star Dwayne Johnson, here's a piece of news on him: according to "The Hollywood Reporter", he will take a role in Warner Bros. sf action LORE. This is actually a movie adaptation of a graphic novel by Ashley Wood and T.P. Louise in which the story is set in a world full of mythical creatures long since held at bay by the secret society of Shepherds. But when the Shepherds' line of succession is broken, a reluctant hero finds her life threatened from every quarter. And the creatures are coming back: Will the Earth be ready for their return? As you remember, Dwayne is appearing this summer in G.I. JOE: RETALIATION next to Bruce Willis and Channing Tatum and also has DAVID AND GOLIATH epic to shoot next year with Taylor Lautner.
Ok, so as I promised this week, here's the first trailer for sf action LOOPER with a great cast lead by stunning Emily Blunt, Bruce 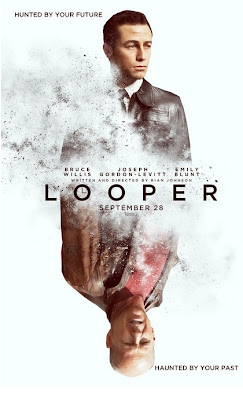 Willis and Joseph Gordon Levitt. Opening in cinemas this September, this time travel adventure thriller is set in a world which has time travel - but it is illegal and only available on the black market. When the mob wants to get rid of someone, they will send their target 30 years into the past, where a looper - a hired gun, like Joe (Joseph Gordon-Levitt) - is waiting to mop up. Joe is getting rich and life is good... until the day the mob decides to close the loop, sending back Joe's future self (Bruce Willis) for assassination. So, Bruce Willis plays the older version of Gordon Levitt. I don't like the look of the film in the trailer, looks very cheap to me.

And I want to thank again all of you who sent me nice Birthday wishes yesterday as well, you know HOLLYWOOD SPY loves you all! And thanks to British star Luke Evans (IMMORTALS, THE THREE MUSKETEERS, RAVEN) who made my day by sending me his congrats too!
Posted by DEZMOND at 12:00 AM