Our favourite blond vampire and an embodiment of a Norse God, Alexander Skarsgard will have a busy summer this year since he has a sf blockbuster BATTLESHIP coming out, in which he fights aliens alongside Taylor Kitsch, but he also has another new project: as "MovieWeb" reports, he has joined the cast of HIDDEN, a movie in which the story will revolve around a family who retreats to a bomb shelter to hide from a mysterious outbreak. Not much else is known about the script but it was paid quite a lot by Warner Bros. and was on the famous Black List last year. Beside his gig in TRUE BLOOD show, you've also seen Skarsgard last year in highly acclaimed MELANCHOLIA and in STRAW DOGS next to equally charming James Marsden.

His fantasy of writing and starring in the expensive epic PARADISE LOST didn't come true, but Bradley Cooper has found another one: he might star in sf fantasy HERE THERE BE MONSTERS, a rather strange story which, according to "Vulture" follows a real-life Revolutionary War hero named John Paul Jones. After he's stripped of his British naval commission, the hero is hired by a shipping magnate to investigate the disappearance of merchant ships in the North Atlantic, which are used as toothpicks by a giant squid. The script was written by Brian Helgeland while the helmer is Jaume Collet Serra who directed ORPHAN and was supposed to direct the doomed sf epic AKIRA.
The only video I have for you today is a fresh trailer for Oliver Stone's action film SAVAGES which features a rather stellar cast and premiers this July. This adaptation of Don Winslow's novel follows two friends 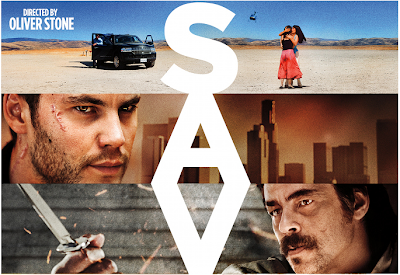 the planet. When they resist being muscled by a Mexican drug cartel, the girl is kidnapped and the ransom is every cent they've made for the last five years. They agree to pay but hatch an alternate plan to get her back,

get revenge, and then get lost. Salma Hayek plays the leader of the drug cartel, and the rest of the cast also includes Emile Hirsch, Uma Thurman, Benicio Del Toro, John Travolta...