Since we are experiencing a very slow period in the film news department, people, I shall have to regale you today with some updates and news from the world of television, but tomorrow you can expect some great

posters from GAME OF THRONES :)
It seems that the trend of movie stars moving to TV continues, so after Ashley Judd, Hugh Dancy, Dustin Hoffman, Jim Caviezel, Patrick Wilson another cinematic face is moving into the small screens: gorgeous Thandi Newton from MISSION IMPOSSIBLE and CRASH will take the lead in DirectTV drama ROGUE according to "Digital Spy". The ten part thriller will see her playing an undercover cop who pursues a gangster when her son is killed in a drive-by shooting. As you remember Thandie does already have experience on TV since she played Noah Wyle's girlfriend in ER in deeply touching episodes in which he was working as a doctor in Africa. I myself remember those episodes as the best ones in the show.

NBC'S NEW COMEDIES
One of the beloved TV comedians Jenna Elfman, whom we still mostly remember as charmingly crazy lady from DHARMA AND

GREG, will go sitcom again. She has joined NBC's pilot 1600 PENN, written by former Obama speechwriter Jon Lovett, which will focus on the US President (Bill Pullman) and his dysfunctional family. "TVLine" says Elfman will play the First Lady. You remember, from HOLLYWOOD SPY's spotlight on 2012/2013 pilots that NBC also has new sitcoms from Roseanne Barr (DOWNWARDLY MOBILE) and from Matthew Perry (GO ON).
Speaking of NBC, another gorgeous blonde will get some work in their new season: sexy Jaime Pressly has taken the lead role in an utterly crazy new comedy show BAD GIRLS, in which, according to "Deadline" she will play prison warden Melinda a "sexy, ominous woman with a sadistic streak". The show is a remake of a British programme which followed the inmates and officers in a women's prison.

ABC GOES FASHION AND SF
ABC always has to have some glamorous drama, and their new

season will bring us SCRUPLES, a lavish show set in the fashion world which will follow wealthy and powerful designer Wilhelmina 'Billy' Hunnewell Winthrop played by beautiful Claire Forlani. She will have two hunks to keep her company in the cast: Chad Michael Murray and Boris Kojoe.
ABC will also see amazing Brian Cox (TROY, RISE OF THE PLANET OF THE APES) in their new fantasy pilot GOTHAM, in which Megan Ketch plays an NYPD detective who discovers a magical world that exists within New York. Cox will play the owner of a simple clock shop, who is entrusted with maintaining order in the secret world.


NEW BRITISH SHOWS
Over at Sky Atlantic they will have something utterly crazy and reminiscent of silly British humour from ABSOLUTELY FABULOUS: BRIDESMAID's director Paul Feig is helming their RONNA AND BEVERLY show, a mock talkshow featuring two forthright, middle-aged Jewish American mothers as hosts played by American writers and performers Jessica Chaffin and Jamie Denbo. They will have real celebrity guests, the first being Jon Hamm from MAD MEN, who will be asked some horrid and humiliating questions in the pilot :) 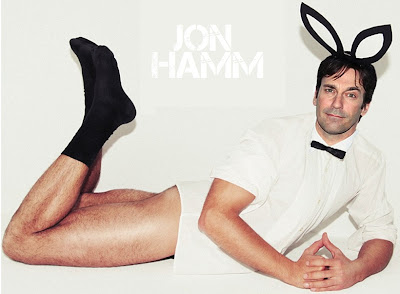 Over at ITV they will have MR. SELFRIDGE show, in which Jeremy Piven will play the flamboyant and visionary American entrepreneur, Harry Gordon Selfridge who launched the famous London department store "Selfridge’s". "Digital Spy" reports that the show is set in 1909 and chronicles Harry’s effort to make shopping as thrilling as sex for the era’s newly-empowered women. Frances O'Connor will also star in ten episodes of the show.
Posted by DEZMOND at 12:00 AM