You know how last year I mentioned how Charlize Theron has been present in the film business for some time now, has the looks and the talent, but has never actually

had a big film to be remembered by. Well, it seems that those days are gone, and that this will definitely be her year. She kicked it off earlier this winter with her praised role in YOUNG ADULT (earning critics' approval after her MONSTER Oscar winning role), and then later this summer she has two major blockbusters - Ridley Scott's sf epic PROMETHEUS with Michael Fassbender and SNOW WHITE AND THE HUNTSMAN with Chris Hemsworth in which she will look all divine and naughty as the evil queen. You've seen the trailers for both films and know how Charlize dominates in both. And now a new project has been announced for Charlize: according to "Variety" she has closed the deal to star in currently mysterious sf flick AGENT 13. The plot is kept under wraps but there's a battle between studios for it and it will be directed by Rupert Wyatt who helmed RISE OF THE PLANET OF THE APES blockbuster last year! Charlize is also to appear in MAD MAX: FURY ROAD next to Tom Hardy, but that one is in status hiatus.

Zola's THERESE RAQUIN is all ready to start shooting soon and the update is that it will be shot in Serbia with Jessica Lange, Elizabeth Olsen, Oscar Isaac and crazy Matt Lucas (LITTLE BRITAIN, BRIDESMAIDS) in the lead roles. Elizabeth Olsen plays the title character, who is trapped in a loveless marriage to her sickly first cousin, Camille (Tom Felton), and living with his mother (Jessica Lange). She begins an illicit love affair with Camille’s friend Laurent, which leads to a tragic outcome for all three. Meanwhile, one of HOLLYWOOD SPY's favourite actresses, divine Toni Collette will join Steve Carell in THE WAY, WAY BACK. Sam Rockwell  and Annasophia Robb will also star in the story which follows a teen boy who struggles to find himself as he comes to terms with his unattentive mother (Collette) and cheating stepfather (Carell) during summer vacation

The only trailer for today is for a film which my ladies will flock to see: dramatic comedy MAGIC MIKE which hits cinemas this June, and has a rather hunky cast including Channing Tatum, Alex Pettyfer, Matthew Bomer, Matthew McConaughey, Adam Rodriguez, 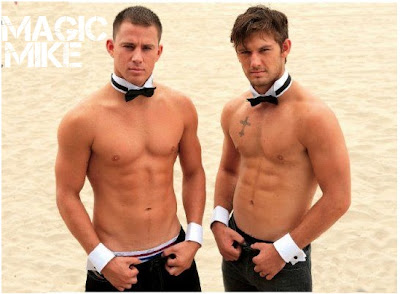 Joe Manganiello and Olivia Munn. Directed by Steven Soderbergh, the film is set in the world of male stripping and is actually inspired by Channing Tatum's own early days. The story revolves around Mike (Channing Tatum) who takes a young dancer 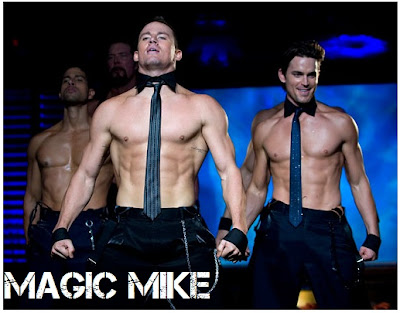 called The Kid (Alex Pettyfer) under his wing and schools him in the fine arts of partying, picking up women, and making easy money. As you can see from the trailer and the pictures, all of the boys are in shape and ready to dance away scantily clad when the film premiers this summer.
Posted by DEZMOND at 12:00 AM