I must admit Alfonso Cuaron has returned my interest in his upcoming project GRAVITY when he kicked Robert Downey Jr.
from the cast and gave the male role to George Clooney beside Sandra Bullock who took the lead role after it was turned down by Rachel Weisz and Angelina Jolie. According to "Collider" the shooting of this sf epic movie should start later this May in UK. Using innovative technology and artsy visual approach, the film will tell the story of a female astronaut, the lone survivor of a space mission, who desperately tries to return to Earth, and reunite with her daughter. The $80 million production will see her racing against time in the middle of dark universe. George Clooney will play the captain of the ship who has a pivotal role in the story. 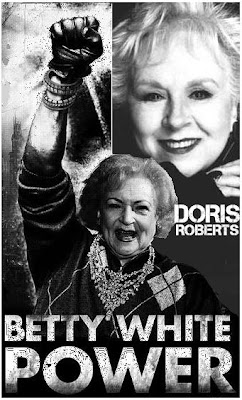 Although I'm not overly amazed by HOT IN CLEVELAND show, I must admit it does have one huge huge quality - amazing Betty White as crazy but adorable Elka :) And it seems Elka will get even crazier at the end of the first season, since she will have a cat fight with, believe it or not, Doris Roberts, whom we remember as annoying and manipulative mother from EVERYBODY LOVES RAYMOND. She will appear in HOT IN CLEVELAND as  a woman who had an affair with Elka's husband in the past, but since she still makes her angry, Betty White will get into a huge physical fight with her :)

Now this could be interesting to those who like American literature. A production has just started on BIG SUR, in which French actor Jean-Marc Barr  will play Jack Kerouac. According to "MovieWeb" Josh Lucas has been cast as Neal Cassady, with Kate Bosworth playing his girlfriend Billie. The story  will follow Jack Kerouac's move from New York to Northern California where he tries to rediscover himself while writing his famous work "On the Road". The semi-autographical tale will also cover Kerouac’s battle with fame, his battle with drugs and his relationship with Cassady’s mistress Billie. Anthony Edwards, Rahda Mitchell, Stana Katic and Balthazar Getty are also in the cast.
Posted by DEZMOND at 12:00 AM