Hollywood is crazy, but we knew that already, didn't we? I  mean for months they give us just a few good trailers and then they release a mass of new ones in just one day: yesterday you've seen the GREEN LANTERN trailer, and now prepare for three new ones: 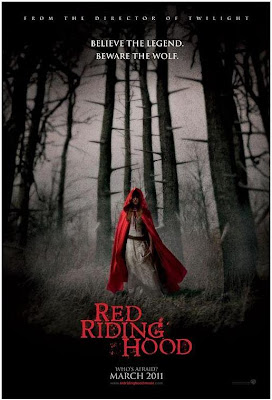 I've written before about the upcoming fantasy horror RED RIDING HOOD, in which Amanda Seyfried plays a beautiful young girl who decides to run away from her village with a boy she loves because her parents want her to marry someone else. But there's a little problem: a werewolf prowls the dark forest surrounding their village. The people of the village have to seek help from a famed werewolf hunter (Gary Oldman) , and he warns them that the wolf, who takes human form by day, could be any one of them. As the death toll rises with each moon, the girl  begins to suspect that the werewolf could be someone she loves. The film also stars Virginia Madsen and Julie Christie, and you can check out the first breathtaking trailer:

Earlier this week HOLLYWOOD SPY wrote about the upcoming COWBOYS AND ALIENS film set in the Wild West in which the cowboys have to join Apache warriors and outlaws in order to fight against aliens who came right from the sky and started abducting innocent people from their desert town. Coming out next summer, this unusual mix of cowboy and alien movies stars Daniel Craig, Harrison Ford, Olivia Wilde, Keith Caradine ...


I've also written about YOUR HIGHNESS before, and you seemed to like the medieval comedy which will be released next April starring: James Franco, Damian Lewis, Justin Theroux, Natalie Portman, Zooey Deschanel and Danny McBride. You can now check out the first fun and naughty trailer.