According to "Deadline" the casting for Zack Snyder's SUPERMAN reboot has officially begun, and beside Joe Manganiello, whom we've already mentioned as the possible candidate for the lead role, new names include two very striking young actors - Armie Hammer (THE SOCIAL NETWORK) and Ian Somerhalder (THE VAMPIRE DIARIES). According to all rumors, the director and the producers want some actor who is not hugely famous (from age 27 to 32) for SUPERMAN. 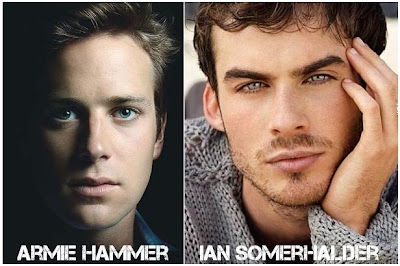 Today's main treat is the first picture of amazing Karl Urban as JUDGE DREDD. The picture shows him in the costume at a rehearsal. According to "MovieWeb" the shooting of the remake of the popular sf action flick has started last week in South Africa. You can check out the plot of the film in HOLLYWOOD SPY's previous post on JUDGE DREDD. And don't forget to vote for HOLLYWOOD SPY in THE MOVIE 411 BLOG AWARDS by our dear Dempsey. If you click on the link you can vote for HOLLYWOOD SPY in the four categories I've been nominated by you gorgeous darlings :) - GOLD MOVIE BLOG, BEST DESIGN, BEST GOSSIP BLOG and SEXIEST MALE BLOGGER :)) You can vote till December 14th. You can also vote for our dear RaShelle, Alex and Jaccsy who are also in the final round in some of the categories.
Posted by DEZMOND at 2:15 PM