I've already wrote about  RETREAT, the exciting new thriller with an amazing cast which is currently in production to be released next year, but now, thanks to Ted, HOLLYWOOD SPY has a cool concept art poster for the film and the first pictures from the shooting. 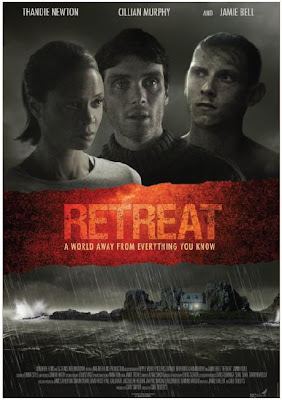 Here's the story: In a last-ditch attempt to save their faltering marriage, a professional couple Martin (Cillian Murphy) and Kate Badenoch (Thandie Newton) retreat to a beautiful, yet remote and unpopulated island of Dinnish in Great Britain. A place where they once shared a romantic holiday – an island that holds fond memories of happier times.
It is Autumn. The rocky, barren moors are blown by freezing winds, and the generator and radio communication in the couple’s cottage are failing. Relationships are already tense, and anxieties are pushed higher when they lose all contact with the mainland, and find themselves inexplicably stranded and cut off. 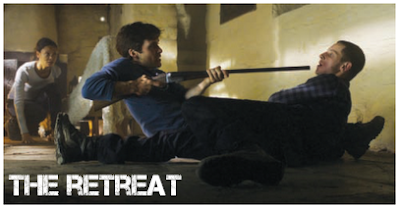 After a huge storm, a stranger (Jamie Bell) is washed up on the shore. He has frightening news of cataclysmic events happening in the world outside. But who is this volatile, charismatic American dressed in uniform and carrying a gun. Is he telling the truth? Slowly, the couple become unwitting players in a ménage-a-trois.
In a series of tense twists the captive couple uses all their ingenuity to outwit the stranger and unravel the truth. But is the truth what they really want to hear? Loyalties divide and merge, paranoia runs high and conflicts bubble to the surface resulting in a violent and shocking conclusion.

HOLLYWOOD SPY has received around 30 awards from fellow bloggers so far (the latest one from the kind gentleman Lee at TOSSING IT OUT) and beside saying a big THANKS to all of you who awarded your spy since 2009, I wanted to remind you that HOLLYWOOD SPY has his own special award ceremony each January so you can all expect a special honour and some love from me then ;)
Posted by DEZMOND at 2:14 PM